Why Trump Made It Easier To Fire VA Employees 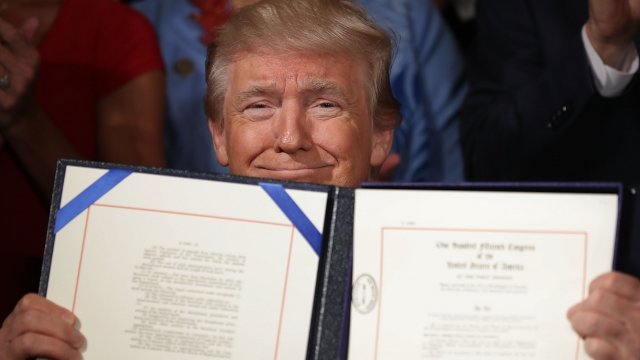 SMS
Why Trump Made It Easier To Fire VA Employees
By Casey Mendoza
By Casey Mendoza
June 24, 2017
President Trump signed the Department of Veterans Affairs Accountability and Whistleblower Protection Act in response to scandals at VA hospitals.
SHOW TRANSCRIPT

The president just made it easier for the Department of Veterans Affairs to fire "failing" employees and protect whistleblowers.

On Friday, President Donald Trump signed the Department of Veterans Affairs Accountability and Whistleblower Protection Act in an effort to improve the administration of the department — specifically in response to a series of scandals from 2014.

"We all remember the nightmare that veterans suffered during the VA scandals that were exposed a few years ago," Trump said.

In a yearlong investigation, CNN found that up to 40 veterans had died waiting for care in the Phoenix VA Health Care System.

CNN's report led the FBI to open a criminal investigation of the department.

Employees responsible for the faulty system — which involved a "secret waiting list" that left veterans with no care — stayed on the government payroll even after they were removed from their positions.

The VA accountability law will increase the powers of the department secretary, currently David Shulkin, to fire employees for misconduct and reduce benefits for hires "convicted of certain crimes."

Before the signing, Shulkin claimed that the department had to take in employees convicted of multiple DUIs, as well as employees who watched pornography while caring for veterans.

"A system that allows this is clearly broken," Shulkin said.

Despite heavy support in Congress, the AFL-CIO called it a "destructive piece of legislation." The union argues the law hurts VA employees — many of whom are veterans themselves — and won't actually solve systemic issues of the department.