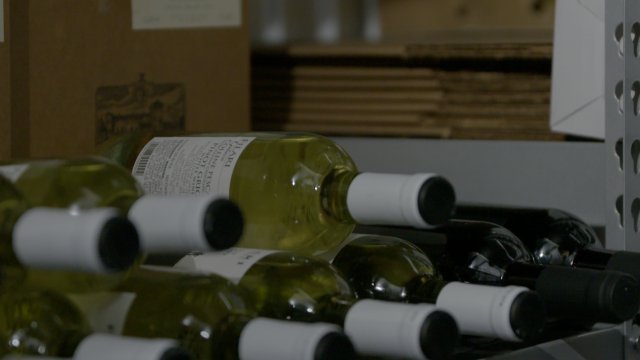 SMS
U.S. Wine Companies Fear 'Catastrophic' Impact Of New Tariffs
By Matt Picht
By Matt Picht
February 13, 2020
The U.S. trade feud with the European Union could have some dire consequences for the wine industry.
SHOW TRANSCRIPT

Kevin Rapp runs a small wine importer in Washington, D.C., bringing wine in from Italy and selling it to other businesses in the area. His entire company is now at risk, thanks to the threat of new U.S. wine tariffs.

The U.S. has already imposed a 25 percent tariff on some European wines, as part of a larger $7.5 billion tariff package. Those taxes were meant to punish the European Union over a dispute about subsidies for the EU airliner Airbus.

The tariffs are already having an impact: after they were implemented, imports of the taxed wines plummeted by around one-third year-over-year.

Now, the U.S. is considering expanding and raising those tariffs, potentially as high as 100 percent. And because of the way wine is sold in the U.S., most of those increased costs would fall on U.S. companies.

Erik Segelbaum is a veteran sommelier who runs a wine consulting company.He's one of the many industry members who've been lobbying in D.C. to try and avert this upcoming tariff hike.

"There's roughly 6500 importers and distributors in this country that employ you know, well over 100,000 people between, you know, truck drivers and dock workers and warehouse workers and administrative staff and all that. Most of those are going to absolutely collapse."

"What we're talking about is a catastrophic failure of an industry not just 'Oh, boohoo a bunch of elitist snobs have to pay more for their unnecessary luxury item.'"

EU wineries will be impacted by these tariffs as well — but not as severely as U.S. companies. Demand for European wines isn't just limited to the U.S., and EU producers are already turning to other markets like China and Brazil.

It won't be easy for companies to replace European wine imports: the U.S. doesn't produce enough domestic wine to fill the gap, and any increased production now won't actually make it to market for 3 to 4 years at least.

Rapp says if the tariffs go into effect, he'll likely have to start from scratch with wineries in Africa and South America to try and keep his business afloat.

He told Newsy, "If you challenge me with something like this, I'm going to try to figure it out. But to be honest with you, I don't know."

"I know that I can. It's just going to take a long time and it's kind of a shame all the work that I've put in over the past three years to see that fall by the wayside."