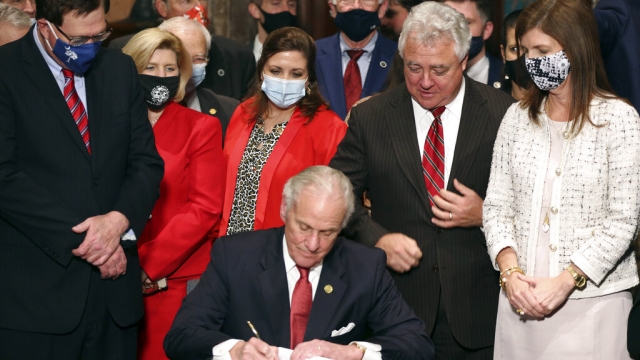 SMS
For Opponents Of Abortion, New State Laws A Route To Supreme Court
By Amber Strong
By Amber Strong
April 15, 2021
Abortion opponents see more restrictive laws being passed by state legislatures across U.S. are a way to push the Supreme Court to act.
SHOW TRANSCRIPT

Across the U.S., anti-abortion rights measures are popping up at state legislatures.

In 2021, 44 states have introduced more than 470 measures aimed at limiting abortion, an increase over previous years. The initiatives are multifaceted.

One of the seven abortion bills recently passed by the Texas Senate bans abortions as early as six weeks into a pregnancy. An Indiana law prohibits the use of telemedicine for medication abortion. And an Arkansas measure signed into law last month would allow abortions only in cases where the woman or fetus' life is at stake. The governor says he'd prefer it to make exceptions for rape or incest — but that enacting the law isn't the point.

"I signed it because it is a direct challenge to Roe v. Wade. That was the intent of it," Arkansas Gov. Asa Hutchinson told CNN.

The overall goal is to see less legal abortion in the U.S. One of the biggest ways to do that would be to get rid of the constitutional right to abortion, Roe v. Wade. That happens via the Supreme Court, which now has six Republican-appointed justices.

"There's a lot of disagreement right on what type of law the Supreme Court might look at to be that case that could be the linchpin, the one that overturns decades of Supreme Court overreach on the issue of life," explained Noah Brandt, communications director for Americans United for Life.

One case to watch: Dobbs v. Jackson Women’s Health Organization, a challenge to Mississippi’s 15-week abortion ban. It’s been set for conference, sitting on the high court’s to-do list, but there's been no action to review or deny the appeal so far.

"If the court were to take this case, it would send a real signal that they are getting ready to weaken abortion rights because the law is not in effect. The other courts struck it out," said Nash.

"Even if the Supreme Court does not take Dobbs in 2021, there will be an abortion case in the coming years that will test this new majority,” said Brandt.

Anti-abortion rights legislators are betting on that, instituting so-called trigger laws meant to go into effect should the justices overturn Roe v. Wade.

"They want to have these in place in case that happened so that the state would in very short order, sometimes within days, ban abortion," explained Nash.

However, legislators who support abortion rights have introduced their own measures just in case.

"Progressive states put some guardrails to protect abortion rights as well. It's just not at the same volume or necessarily the same intensity," Nash continued.

If the court looks at the case in Mississippi, it could also examine the issue of standing and whether abortion clinics have the right to sue the state on behalf of patients … a question the court failed to clearly answer in another big abortion case last summer.