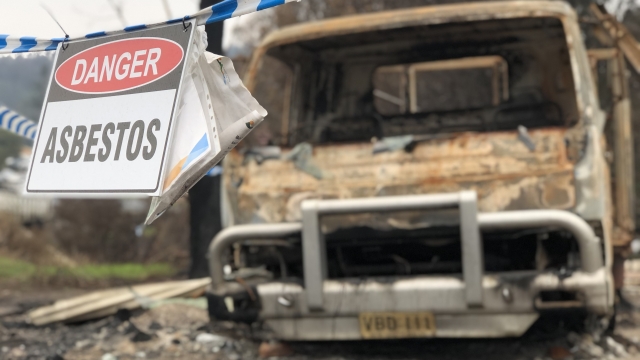 As monstrous bushfires approached towns across New South Wales the last week of December, two families in nearby towns both asked the same question: Stay and fight, or evacuate?

"And just the average morning breeze, you know, nice and fresh. Then all of a sudden it's like someone turned the oven on when the westerly came in. The wind came from the west, from the fires. Then it went up probably 10 degrees instantly, just with the hot wind like it was, like opening the oven door," Cam White said.

On New Year's Eve, Cam White, a resident of Dalmeny, was cleaning his gutters when dark clouds rolled in.

"The next thing it was the latest thunder and lightning, you know, like, the craziest storm. So I hopped off the roof because it was just that crazy, and that was a thunderstorm created by the fire," White said.

Fearing for their safety, he, his wife and two children jumped in their car and sped off to the next town to wait out the storm, never imagining what would happen next.

"It was pitch black, and on the horizon was just this red glow, and it was just — it's terrifying, you know what I mean? Like, it's the middle of the day, it's pitch black with the horizon literally just on fire," White said.

It took him eight hours to make the two-hour drive to his parents' house in Canberra — normally a scenic drive now an inferno. But they made it.

"So, you know, we definitely got lucky, but, you know, there's definitely a lot of houses, a lot of people in a lot of communities that weren't as lucky as us," White said.

"We could see the glow in the sky. And that's what we heard that, like, the jet engine roar. And then, like, half and half from there was coming over this one, and would have only been minutes from being there to roaring up the hill at us. And it also came across from this way, basically was attacking us from lots of places, lots of sides," Rhys Kenna said.

Twelve miles outside of Cobargo, in the little town of Yowrie, Rhys Kenna and his son made a decision to stay and fight.

Kenna says temperatures outside quickly rose, like an oven. But he was prepared. He had been gathering supplies for a normal fire season for 15 months.

"But luckily, with the two of us and with a lot of water, and we managed to save it," Kenna said.

It took almost 400 gallons of water to save his home, but they did it.

"You shouldn't stay ... if you're not prepared to defend it and well prepared, and we think — I think we were reasonably well prepared. We saved the house with minimal damage. So you got to have a backup plan. You can't just stay for the sake of staying," Kenna said.

"I'll just leave. I can get and new house and new business. It's not worth your life," White said.

Now White can continue building his dream, Big Niles Brewing Company, with the hopes of opening its doors for business in April.

But the real battle has only just begun for the Kenna family.

"The nightmare doesn't finish once the fire goes through. That's water that's coming out of the gutters. Because I've been disconnected. Electricity, I don't know when we're going to have that. That's the main supply to the house, so you can see they've been fairly impacted. That was a big thing on that night," Kenna said.

And it may take decades before residents in the area feel any sort of normalcy.

"In the forest crash, crash, all over the place. And you didn't really want to go in the forest because and still be gone from four months of trees falling over when they took 40 years for those ones to grow. Now, we may know the 40 years before they're looking like that again," Kenna said.

And still, the historic fires are burning.