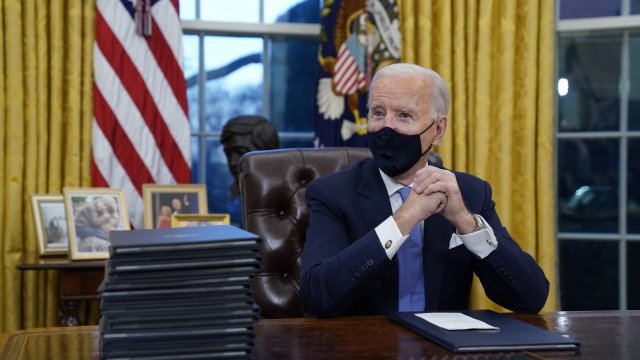 Throughout Joe Biden's campaign for president, he has emphasized his commitment to fighting for racial justice. Tuesday, he will take his first major actions toward that goal as president of the United States.

In reaction to the 2014 racial justice protests in Ferguson, Missouri, where local police donned military gear and used tanks and tear gas against protesters, President Obama barred federal agencies from providing local cops with some military equipment, like armored vehicles and high-caliber weapons and ammunition.

Keeping with a campaign promise, President Biden will also reportedly sign an executive order to phase out federal use of private prisons.

Under the Trump administration, private prisons saw a boom in their utilization and stock price. According to Public Citizen private prisons received more than $2.3 billion in federal contracts in 2018 alone with some of the largest contracts coming from ICE and the Department of Homeland Security.

Since then, public pressure has led several major banks, including J.P. Morgan Chase, to separate themselves from the private prison industry.

These actions, along with a potential suspension of federal contracts, could be a real problem for the private prison industry, whose stock price has fallen by 30% since June.