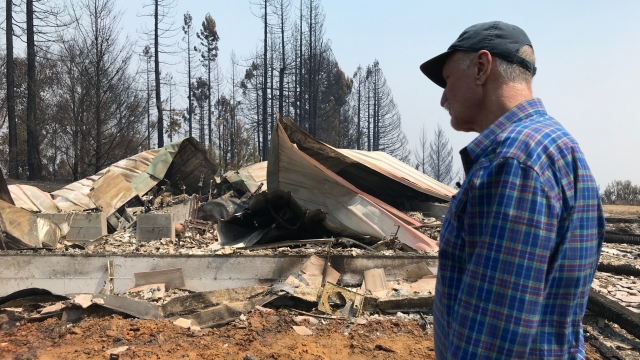 Modestly improving weather conditions are helping firefighters progress against massive blazes that have been burning in Northern California.

Yet as gusty winds decrease, continued dry lightning strikes trigger new fires. This comes as residents are returning to scenes of devastation, such as what homeowner Art Thomas found in Vacaville, California.

"I built almost everything in this house. I hammered the nails. I built my shop. I can't tell you. I just. This has been my hobby, my life. My wife and I don't take vacations. We're here. We live in this beautiful area. It's not so beautiful today," he said.

More than 650 California fires, including two dozen major blazes, had burned a whopping 2,000 square miles as of Wednesday and destroyed over 1,400 homes and other structures. Two of the fires rank 2nd and 3rd among the largest in state history.

Between Tuesday and Wednesday alone, California had more than 400 reported lightning strikes. They triggered 50 new fires, all of which were contained.

"It gives you a sense of the magnitude and scope of what these incredible leaders, these incredible frontline heroes are doing every single day, not only to address what is top of mind in our consciousness - these two dozen large scale wildfires - but trying mitigate the impact and spread of all these new fires that are lighting up (at) almost seemingly an hourly basis," said Gov. Gavin Newsom.

Seven people have died in the fires, including a helicopter pilot killed in a crash while responding to a blaze near Fresno.

Additional fires burn throughout the West, with more than 300 square miles scorched in Colorado and other fires burning in Arizona, Utah, and New Mexico.