Dark Matter Is Hard To Find, But Hubble Might Be Able To Help 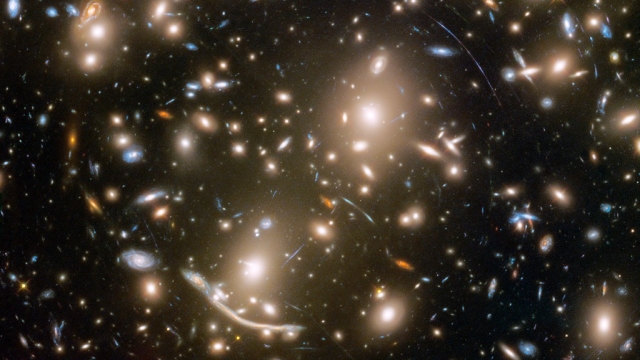 NASA's Hubble Space Telescope has peered across 6 billion light years of space, giving us unprecedented views of our universe. Its newest and final Frontier Fields image shows just how vast our universe is and is helping astronomers study one of the most elusive secrets of space — dark matter.

Researchers think dark matter is more common in the universe than visible matter, but because it does not absorb or emit light, they have a hard time finding it and studying it. The best way is to watch for its effects on other things we can see, like in images from the Frontier Fields program.

"We can't study it by using traditional methods like looking at the light it gives off," said NASA scientist Padi Boyd. "That's exactly why we call it 'dark matter.' Using an image like the Frontier Field and how it's distorting the galaxies behind it allows us to map out the dark matter."

The Frontier Fields program aims to push our view of the universe all the way back to the Big Bang, showing us some of the earliest objects and galaxies in the cosmos.

The new image captured the thousands of galaxies in a cluster known as Abell 370. Astronomers think the cluster contains two large clumps of dark matter.

And although this is the last Frontier Fields image, astronomers can study its observations for years to come. Hubble will also continue to lay the groundwork for future missions, like NASA's James Webb Space Telescope.