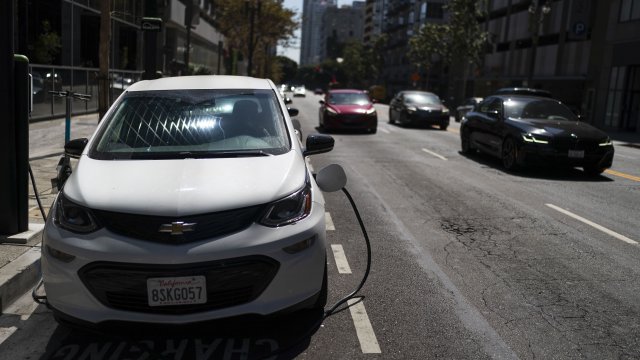 SMS
New Gas-Powered Cars Will Be A Thing Of The Past By 2035 In California
By James Packard
By James Packard
August 25, 2022
California's Air Resources Board approved a sales ban of all new, gas-powered vehicles by 2035, which could slash the state's emissions.

California is moving to ban the sale of gas-powered cars.

The state’s Air Resources Board approved a timeline that requires 100% electric or hydrogen-powered new vehicle sales by 2035 and a minimum of nearly 70% by 2030. By 2026, the state will require 35% of all new cars sold to run on electricity or hydrogen. Automakers would be fined $20,000 for every new gas-powered car sold outside those benchmarks.

Right now, about 16% of new cars sold in California are electric.

The move is huge for the country’s most-populous state. It could slash California’s car emissions in half by 2040.

But it’s also a harbinger of things to come for nearly a third of the U.S., with about a dozen other states likely to follow in California’s footsteps.

The massive new deadline lights a fire under car makers who are already having trouble pumping out electric vehicles fast enough to meet current demand.

Already, Ford is struggling to get models of its Lightning pickup truck off the line.

Incentivizing drivers to give up older, gas-powered cars in exchange for new battery-powered ones means coming up with more electric cars that drivers want to have, like the electric Dodge Charger, which is engineered to sound like its gas-powered ancestor.

"Horses and buggies went away because cars were better," Kuniskis said. "The adaption to electrification is not going to happen from government subsidies. It's going to happen when that is better than what they have today."

In Milwaukee, Wisconsin, Veronika Wright is converting a 1999 Jeep Wrangler to run on batteries, and she’s not planning to stop there.

"I wanna be converting Jeeps, boats and also other industries," Wright said.

It's a sign of things to come for an industry in the midst of a planet-saving revolution.