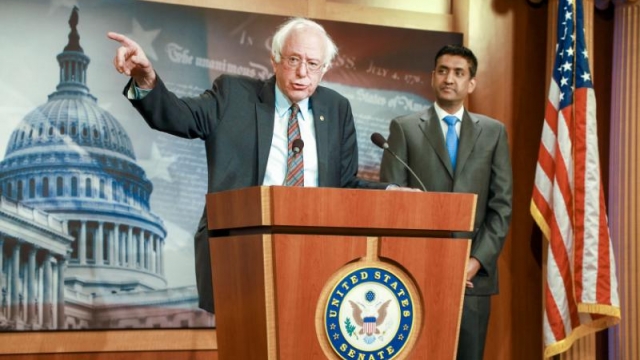 Sen. Bernie Sanders and Democratic Rep. Ro Khanna introduced legislation that would block "funding for offensive military force in or against Iran without prior congressional authorization."

The legislation was introduced a day after Thursday's U.S. airstrike that killed Iran's top military commander at Baghdad's international airport. Major-General Qasem Soleimani was the head of Iran's Quds Force, which the U.S. considers a terrorist organization. President Donald Trump authorized the strike without congressional approval, which triggered criticism from lawmakers.

Additionally, Democratic Sen. Tim Kaine introduced a war powers resolution Friday, which could force debate and a vote in Congress on further escalation of hostilities with Iran.

In a joint statement Friday, Sanders and Khanna said: "War must be the last recourse in our international relations. That is why our Founding Fathers gave the responsibility over war to Congress. Congressional inaction in the face of the threat of a catastrophic and unconstitutional Middle East conflict is not acceptable."

"This is a dangerous escalation that brings us closer to another disastrous war in the Middle East," Sanders said.

At a town hall event in Iowa Friday, Sanders warned supporters another war in the Middle East could "cost countless lives and trillions more dollars." However, President Trump says that isn't his aim.

"We took action last night to stop a war," President Trump said. "We did not take action to star a war."

Secretary of State Mike Pompeo said the airstrikes disrupted an "imminent attack" that would have put American lives at risk. He provided no details on the threat.