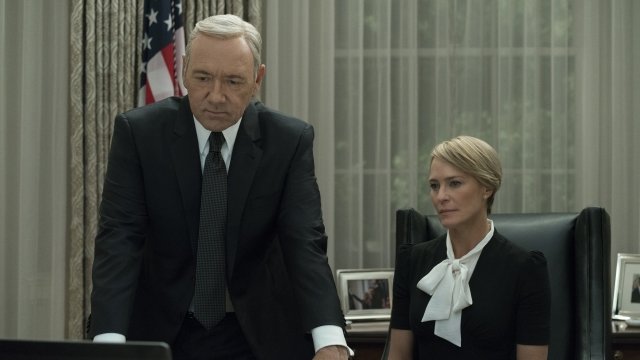 Netflix is reportedly developing a "House of Cards" spinoff. But there are few details about which characters that spinoff might focus on.

"House of Cards" will end its run on Netflix, but the streaming service might still have plans for some of the series' characters.

Variety reports Netflix is in the early stages of developing a potential "House of Cards" spinoff — and with multiple ideas on the table, the company could greenlight more than one.

One possible spinoff is with President Frank Underwood's chief of staff Doug Stamper. Actor Michael Kelly, who plays Stamper, has been with the series since it started in 2013.

Netflix revealed a new estimate in its third-quarter report for how much it'll spend on content next year.

On Monday, Netflix said "House of Cards" would end after its upcoming sixth season. The announcement came after "Star Trek: Discovery" actor Anthony Rapp accused Kevin Spacey of making a sexual advance toward him when he was 14. Spacey, who stars as Frank Underwood in "House of Cards," apologized for his "deeply inappropriate drunken behavior" and came out as gay in the same statement.

Despite the timing of the show's cancellation, Deadline reports Netflix already considered ending "House of Cards" before the Spacey allegations.

It's not surprising Netflix might keep some parts of the show going. It was the streaming site's first original series and has won seven Emmys and two Golden Globes.

On Tuesday, Netflix announced it was indefinitely suspending production on the final season of "House of Cards." In a statement, the streaming company said this was being done to review the allegations made against Spacey and "to address any concerns of our cast and crew." Prior to this announcement, the sixth season was expected to drop on Netflix in mid-2018.