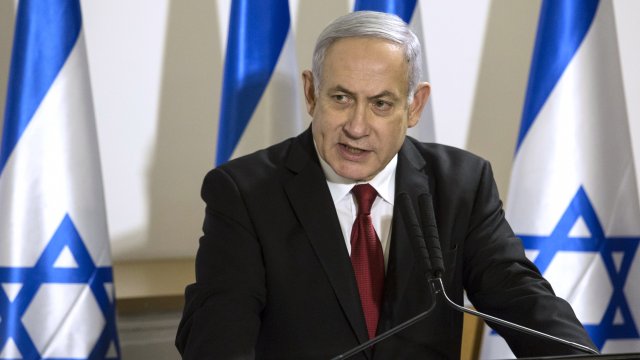 Israeli Prime Minister Benjamin Netanyahu has been indicted on charges of bribery, fraud and breach of trust. This is the first time in Israel's history a sitting prime minister has faced criminal charges.

Israel's Attorney General Avichai Mandelblit made the announcement Thursday. Netanyahu faces one count of bribery and three counts of fraud and breach of trust in three separate cases. Mandelblit first announced plans to indict the prime minister in February in connection with what are known as Case 1000, Case 2000 and Case 4000.

Case 1000 accuses Netanyahu of receiving "hundreds of thousands of shekels" worth of gifts, like cigars and champagne, from Hollywood producer Arnon Milchan and others.

Case 2000 alleges Netanyahu made a deal with Arnon "Noni" Moses, the publisher of an Israeli newspaper. The prime minister allegedly backed a bill that would weaken a rival newspaper in exchange for favorable coverage.

And Case 4000 accuses Netanyahu of making another deal for positive news coverage, this time with the online outlet Walla. Prosecutors say he made regulatory decisions that favored the Bezeq telecom group, which owns Walla.

Netanyahu has served 13 years as Israel's prime minister. He has denied wrongdoing since the corruption investigations began almost three years ago and says he's the victim of a political "witch hunt." But Mandelblit, who was appointed by Netanyahu, says his motives are purely professional.

Legal experts say the prime minister could face up to 10 years if convicted of bribery, the most serious charge, as well as up to three years for the fraud and breach of trust charges.

Technically, Netanyahu is not required to resign. But he may not be able to seek immunity from prosecution either. Israel is facing political deadlock because both Netanyahu and his rival, Benny Gantz, failed to form a coalition after September's elections. As such, a formal indictment might not happen for another few months unless Israel's Supreme Court agrees to move a trial forward.