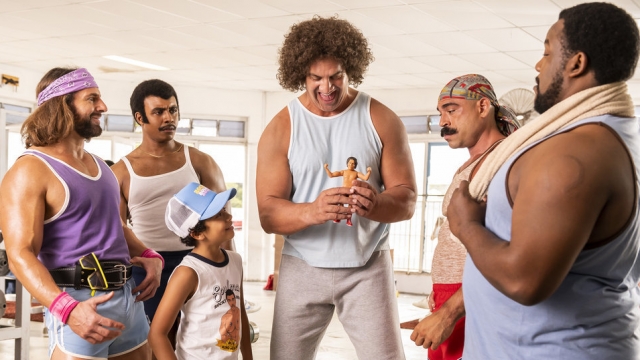 SMS
NBC Sitcom 'Young Rock' Pays Tribute To Andre The Giant
By Casey Mendoza
By Casey Mendoza
March 30, 2021
Show portrays both the difficulties of working in the pro wrestling industry and the community it created.
SHOW TRANSCRIPT

We remember this legendary 7'4" wrestler as Andre the Giant. But for Dwayne "The Rock" Johnson and his new biographical sitcom "Young Rock," he's Uncle Andre.

Actor Matthew Willig: "Dwayne was articulate and detailed about his feelings about Andre. He called him 'Uncle Andre.' … It gave me that last little bit of character influence that I needed to kind of really hone it in as we went along."

Actor and former NFL player Matthew Willig plays the iconic wrestler — who died of congestive heart failure in 1993. Other famous wrestlers portrayed in the NBC sitcom include the Iron Sheik, Junkyard Dog, the Wild Samoans and The Rock's own father, Rocky Johnson.

The characters honor the history of professional wrestling and the show portrays both the difficulties of working in the industry and the community it created.

Willig: "It was really important for Dwayne to have people realize that this is what he grew up in. He grew up in a crazy sort of wrestling world."

Willig: "Andre was so sort of lovable in his personal life. He was this sweet giant. … When you're playing someone iconic like that, you have the sense of getting it right, doing the best for him and his legacy."