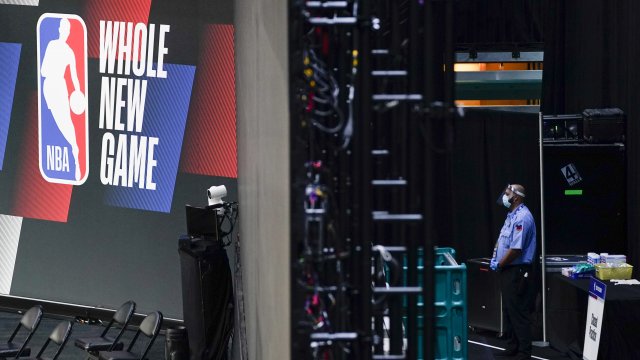 The NBA is back Thursday with a pair of games. The New Orleans Pelicans play the Utah Jazz and Los Angeles' crosstown rivals, the Lakers and the Clippers, will face off.

All games will be played in neutral territory at Disney's ESPN Wide World of Sports Complex near Orlando. Twenty-two teams are returning for eight regular season games before the playoffs tip off in mid-August.

The NBA has had zero positive tests among the 350 players tested since July 20. But Commissioner Adam Silver says he's watching what's happening in baseball right now and knows his league needs to be ready.

"If we had any significant spread whatsoever, we would certainly stop immediately, "Silver said. "And then we would investigate immediately and determine whether we could move forward."

The NBA has been praised for its "bubble" concept, which isolates players and staff to the Orlando complex in an effort to prevent exposure to coronavirus. The NHL is also doing a bubble in two Canadian cities, Toronto and Edmonton. And the WNBA is playing in what the womens basketball league calls its "wubble" in Bradenton, Florida. One public health expert notes these leagues are getting something else right: oversight of activities outside of games and practices as well as extensive testing with a fast turnaround.

"With that kind of testing, I think what you're then looking for is, are you catching cases when they're just one or two, single-digit type of cases? Are you able to quickly isolate? And if you're able to quickly isolate and contact-trace, and as long as you're sort of consistently keeping those one or two cases from turning into five, six, seven or eight — I think I would feel OK about that," said Dr. Kathleen Bachynski, an assistant professor of public health at Muhlenburg College.

Meanwhile, ESPN reports baseball is tightening its rules after an outbreak with the Marlins organization caused multiple game cancellations. According to that report, players will now be required to wear surgical masks while traveling and every team must have a compliance officer. Unlike the NBA, NHL and WNBA, baseball is operating a regional travel schedule, which has raised concerns about virus transmission.

Nathan Byrne oversees the OTT team's day of news content strategy and on demand experiences across Newsy's digital distribution. His job is to ensure viewers get the best experience by including coverage of the most important stories of the day, curating topical content and managing special live event coverage. He has more than 20 years’ experience in journalism and mass communication including local television, corporate marketing/public relations and digital startups. He is a graduate of the Missouri School of Journalism. @nathanbyrne