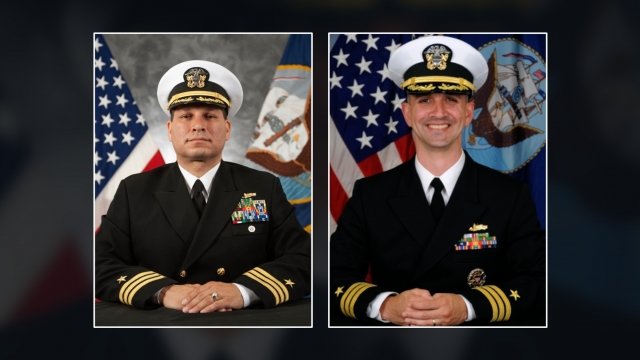 SMS
The Navy's Leadership Shakeup Continues After Series Of Collisions
By Katherine Biek
By Katherine Biek
October 11, 2017
The Navy said it had lost confidence in the commanding and executive officers' abilities to lead the USS John S. McCain.
SHOW TRANSCRIPT

The U.S. Navy isn't done making leadership changes after a string of collisions in the Pacific.

The top two officers in charge of the USS John S. McCain were relieved of duty Wednesday.

Both men were reassigned to other duties in Japan.

The McCain collided with an oil and chemical tanker east of Singapore back in August. Ten U.S. sailors aboard the ship died. The Navy is still investigating the collision, but said it was "preventable."

That collision is just one of four Pacific fleet accidents this year. And these incidents have resulted in a major Navy leadership shakeup.

The USS Antietam ran aground in Japan; the USS Lake Champlain hit a fishing boat; and the USS Fitzgerald collided with a merchant vessel, resulting in the deaths of seven sailors.

The Navy removed Vice Adm. Joseph Aucoin as the 7th Fleet's commander in August. And last month, Adm. Scott Swift, who's responsible for all Naval forces in the Pacific, said he plans to retire after being passed over for higher command.

Swift is the most senior Navy official to step down after the McCain collision. Earlier in September, two more leaders operating within the 7th Fleet were dismissed: Rear Adm. Charles Williams, commander of Task Force 70; and Capt. Jeffrey Bennett, commander of Destroyer Squadron 15.