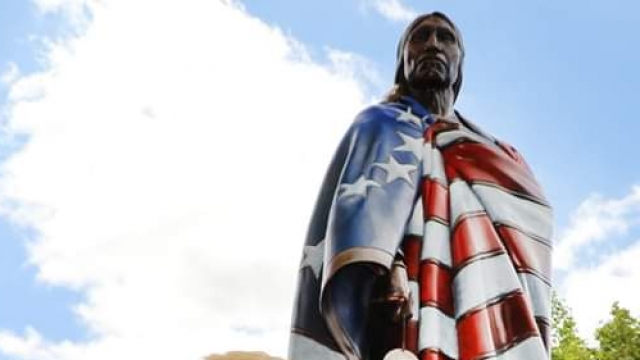 A dream 15 years in the making… finally coming to fruition.

“As we know Native Americans have paid the price over and over again and fought in many wars, to protect the freedoms that we have for our people here in the United States in our native peoples,” Kenneth Ramirez, the San Manuel Band of Mission Indians Chairman, told Newsy.

There are 150 national veterans affairs cemeteries across the country...but this Riverside, California resting site, one of the biggest in the country, will be the first to have a plaza dedicated to Native American veterans …

An honor these veterans say they will be proud to witness....

"There aren’t too many have not been, you know, not alive to see it. I’m just fortunate to be able to be a part of helping develop this recognition," Bo Mazzetti said.

These sacred burial grounds will showcase a plaza and walkway centered on “The Gift,” a bronze statue representing all the American Indian, Alaska Native and Pacific Islanders who have served in the military.

"When we saw our statue, you know, it was just so profound that oh, my this must be on display,” Angelo Vincent Schunke said.

Angelo Schunke, a Morongo tribal member and Navy veteran, says throughout history many “warriors” — including the famed Navajo Code Talkers in World War II — faithfully served only to have their families and friends treated terribly back home.

“First, don't speak your native tongue in school, then the government wants you to keep your native tongue. And then, without realizing it until after the war, the word was given that if looked like if you're overrun by the enemies, your fellow mates take you out, because you're too valuable and the code would be broken,” Schunke said.

Navajo Code Talkers transmitted messages using an unbreakable code based on the Navajo language. As history has shown, they were essential for helping the United States win one of the country’s biggest wars.

“This is healthy medicine, for all the natives that have been in conflict that have never had time to reflect on that, who they lost, what it means where to go," Schunke said.

Construction will commence once members of the Riverside National Cemetery support committee are able to raise more funds.

“i really think that the creator's watching over us. Some of our tribal leaders are very excited now that this has gone to the stage of groundbreaking and I believe that we will be receiving some significant donations within the next few months,” Sharron Savage said.

For more than a decade, Sharron Savage says she has helped bring this dream into reality. Now she can see the finish line and hopes the plaza will be completed before the end of 2021.