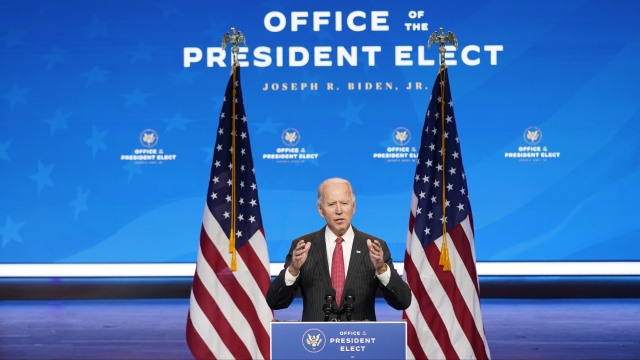 President-elect Joe Biden will inherit a host of urgent national security matters come Jan. 20. And some former Trump administration officials say the president has made that job more difficult.

"Elizabeth, do you feel like the country is more or less safe after four years of President Trump?"

"I think we're less safe," says Elizabeth Neumann. "I knew this was going to be different. I did not appreciate how dangerous he was."

But soon after should be addressing domestic terrorism.

"The president's rhetoric is emboldening right-wing extremism," Neumann says. "I'm increasingly concerned that when the pandemic mitigation measures end, and we resume normal life, and we go back to mass gatherings, that will create targets of opportunity for white nationalists, for anti-government extremists."

"Any time, anywhere in the world that we advertise an exact departure for our troops, then we give room for terrorist organizations to recruit with that message and to plan their logistics for resupply," says Kirsten Fontenrose, the former senior director for Gulf Affairs at the White House's National Security Council.

Tensions with Iran have risen recently: Trump reportedly considering a strike on a nuclear site in Natanz, and rockets said to be fired by Iranian proxies hitting the U.S. Embassy compound in Baghdad.

"You have to question what Iran's motivation is in trying to bait the Trump administration into kinetic activity right before they leave the office," says Fontenrose, now director of the Atlantic Council's Scowcroft Middle East Security Initiative. "And it would put Biden in an incredibly difficult position where he'd be forced to deal with that. Although if you are the hard liners in Tehran, this is a perfect scenario."

Escalations could jeopardize Biden's hope of rejoining the nuclear deal. That's after estimates this year that Tehran, no longer bound to the agreement, could now produce enough material for a nuclear bomb in three to six months.

With China, Biden faces a growing tech war. Trump is reportedly poised to enact hard-line policies in the hopes of locking in his legacy. His fourth and current national security adviser flags the increasing threat:

"Now with machine learning, with AI, with the cloud, the Chinese have become very adept at putting together a total surveillance society. They're now moving outside of China to do that around the world, and they want to have a file on every single one of us," says National Security Adviser Robert O’Brien. "...They'll eventually have a social credit score on everyone in the world. And then they'll use that to manipulate us."

The Biden transition team told Newsy it's not in a position to comment at the moment. Biden continues to be denied intelligence briefings.