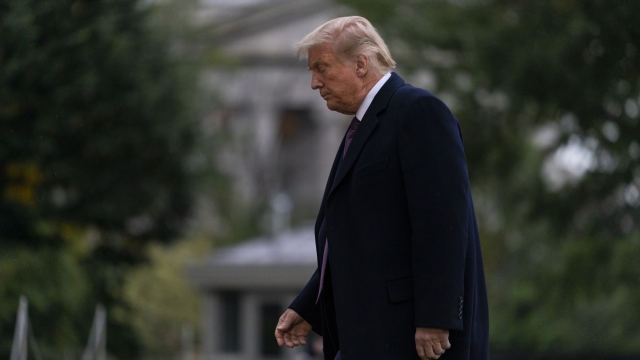 An unprecedented moment for the country as the president tests positive for COVID-19.

"The extent that you've got any leader who may have a real or even a potential hindrance of their ability to lead, then yes, it's a vulnerability," Robert Cardillo, former director of the National Geospatial-Intelligence Agency said.

"They'll use this as an example that China is back to business and the U.S. is still under crisis," Cardillo said.

Terrorists are another matter:

"There's chances, for example, that random terrorist groups could decide that maybe they wanted to attempt something, maybe outside the U.S," said Carter Malkasian, former senior adviser to the chairman of the joint chiefs of staff and a research analyst, CNA.

But experts say any aggression from anyone would be bold.

"They are not going to know how sick the president is most likely. They're not going to have a good idea if he's about to get better or not. And if they were to try something, they don't know if he gets better, now, how is he going to react to that," Malkasian said.

President Trump’s physician says he expects the president to be able to carry out his duties "without disruption." Even in isolation, the president can maintain communications to give orders. And the military has a clear chain of command, with commanders in every part of the world.

"It's not like because the president is sick that U.S. operations have stopped somewhere," Malkasian said.

The diagnosis prompted messages from foreign leaders for a quick recovery.

"On the hypothetical path, a path in which the president becomes more ill," Cardillo said. "You would have increased anxiety from our allies, you would probably have a more active response from our government to assure them...our commitments will follow as well."

So far the president has mild symptoms. If his health were to deteriorate, Vice President Mike Pence would be next in line, followed by House Speaker Nancy Pelosi. But ailing presidents aren't new.

One intelligence officer tells Newsy the diagnosis shows a “tremendous” lack of security screening, saying the president “has continually thrown caution to the wind to hold his vanity rallies.”

Neither the White House nor the Pentagon commented on security concerns around Trump's health. Jonathan Hoffman, Assistant to the Secretary of Defense for Public Affairs, later said in a statement, "There’s been no change to DoD alert levels. The US military stands ready to defend our country and interests.  There’s no change to the readiness or capability of our armed forces.  Our national command and control structure is in no way affected by this announcement."