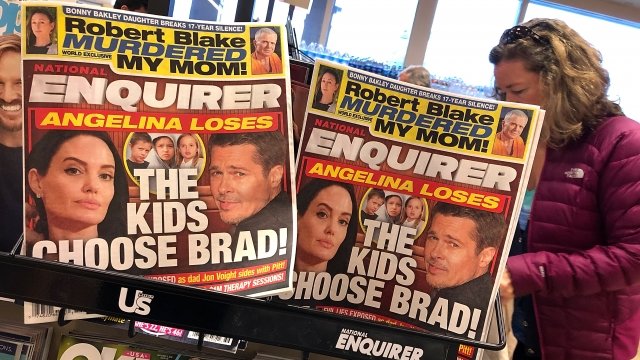 The parent company of the National Enquirer, American Media Inc., admitted it paid for a woman's story alleging she'd had an affair with Donald Trump in 2006 and then suppressed it to protect Trump. The revelation came Wednesday when federal prosecutors in the Michael Cohen case disclosed a non-prosecution agreement with AMI.

A statement by the U.S. Attorney's Office in New York's Southern District said, "As a part of the agreement, AMI admitted that it made the $150,000 payment in concert with a candidate's presidential campaign, and in order to ensure that the woman did not publicize damaging allegations about the candidate before the 2016 presidential election."

AMI's CEO is a longtime friend of Trump. Anonymous sources familiar with the matter reportedly told The Associated Press the National Enquirer had a safe filled with "documents on hush money payments and other damaging stories" involving Trump, and that it "killed" those stories in the run-up to the 2016 election.

The ranking member of the House intelligence committee, Democratic Rep. Adam Schiff, said he thought this was the most "significant" development that came from the Cohen case.

He said: "It is now Donald Trump's word against everyone else. That there are witnesses at AMI who will testify these payments were made for the express purpose of influencing the election, by depriving voters of knowledge of these stories of women coming forward to say they had affairs with the candidate for the president — that is powerful corroboration."

Trump has consistently denied engaging in any affairs.