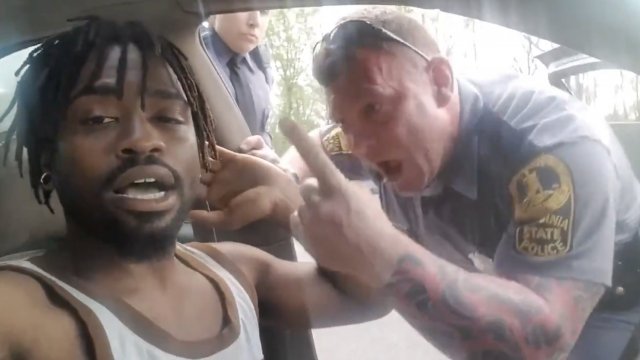 Virginia State Police pulled over Derrick Thompson in 2019 outside Washington for an expired inspection tag.

Trooper Charles Hewitt ordered Thompson out of the car after, according to police, Hewitt smelled pot and realized Thompson was driving on a suspended license.

Thompson, video recording the traffic stop in plain sight, refused to get out.

“You’re gonna get your ass whooped in front of f---ing lord and all creation,” Hewitt says. “Watch the show folks!”

The camera does not capture what happens next.

Thompson says Hewitt forced him to the pavement, cutting and scraping his face and left leg.

After the video was shared widely on social media, Hewitt was “terminated for cause” by Virginia State Police.

Virginia law at the time said Hewitt's actions were not enough to decertify him from working in the state again.

Being decertified is the only way to end up in the country’s main registry of police disciplinary action.

“It’s just a way of background checking to see if an officer had problems in a previous state,” said Roger L. Goldman, a law professor at Saint Louis University.

The list has always only included police whose misconduct got them decertified by a state.

It does not name those such as Hewitt who lose their job but keep their license to work as an officer.

“Let's suppose the officer had been involved in excessive force but had not been decertified,” Goldman said. “That wouldn’t appear on the database.”

After four decades the registry contains more than 30,000 actions against police, but does not contain entries from four states that do not decertify officers: California, Hawaii, New Jersey and Rhode Island.

It also does not have any names from Georgia, a state that does not report decertifications to the database.

There’s another issue we discovered.

"That is another shortcoming that ought to be mandatory for both the state licensing agencies as well as law enforcement agencies to check that database," Goldman said.

It would create a new national misconduct registry.

Unlike the decertification index, it would log complaints against police, termination records, lawsuits and settlements.

Virginia’s Office of the Attorney General represented now former trooper Hewitt in a civil case brought by Thompson and settled out of court.

The attorney general’s office did not respond to multiple requests to get Hewitt’s side of the story.

He remains eligible to work as an officer in Virginia, according to the state Department of Criminal Justice Services.