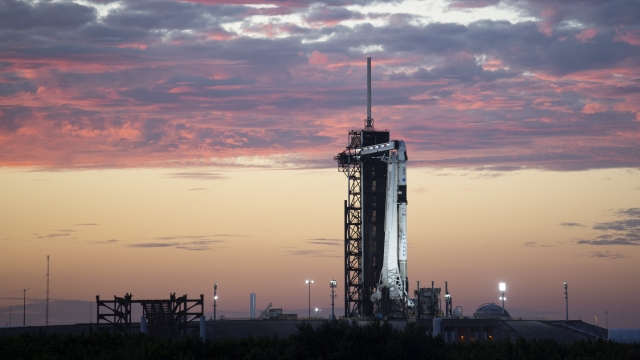 SMS
NASA's SpaceX Crew-3 Mission To Launch This Weekend
By Haley Bull
By Haley Bull
October 29, 2021
The flight will debut a new capsule, named Endurance, with improvements based on lessons learned.

A SpaceX rocket will launch the Crew Dragon spacecraft with four astronauts to the International Space Station. They're expected to dock at the station about 22 hours after liftoff.

"We're ready to go and couldn't be happier about being here," said Chari, the mission commander, as the crew arrived to Cape Canaveral earlier in the week.

It will be the first trip to space for all but Marshburn.

"For me, this will actually be the first rocket launch I've seen in person, and I'll be in the capsule on top of it," Barron said.

The flight will debut a new capsule, named Endurance, with improvements based on lessons learned.

"So excited to see those changes roll in as well as some of the other just small kind of under the hood changes. Not really big changes just a little bit of things to make it easier to process, easier for the crew. Little things like USB charging ports for the first time for them to charge their tablets in the vehicle," Posey said.

New experiments will also launch aboard the microgravity laboratory.

That includes a Smartphone Video Guidance System created between NASA's Marshall Space Flight Center and the Florida Institute of Technology. Scientists say it could impact future human landing systems. For this mission, the technology is loaded into a flying robotic cube that will do a series of maneuvers.

Another experiment will study the immune system before, during and after astronaut's space trip, including microbes in space.

An enhanced space diet will help researchers learn more about impacts on the gut.

Another project will rapidly grow micro-crystals, which could have medical applications.

"We're looking at the structure of the RNA, when a ribosome binds. So basically it's a signaling switch that turns the product on and off for genes. So we're looking at imaging, how exactly this happens to these molecules," Jennifer Buchli said.

Buchli is the acting ISS chief scientist. She said in general, about 250 experiments happen in a 6-month period.

"A lot of those benefit us here on Earth, and then quite a few of those also help NASA and our international partners with future exploration programs," Buchli said.

The launch is part of NASA's Commercial Crew program. It uses private spacecrafts to bring astronauts to and from the International Space Station.

This is the third crew rotation on the SpaceX Crew Dragon.

"They're certainly showing they can do it at a regular cadence and are not having large delays of any sort at all," said Don Platt, an associate professor of space systems with Florida Tech. "I think this also opens up NASA to be able to concentrate on other things. If they can buy services like this to go to earth orbit, then they can concentrate on getting out to the moon and maybe one up the next commercial market there for in the future commercial groups providing that capability."

Liftoff is targeted for around 2:20 a.m. ET Sunday.