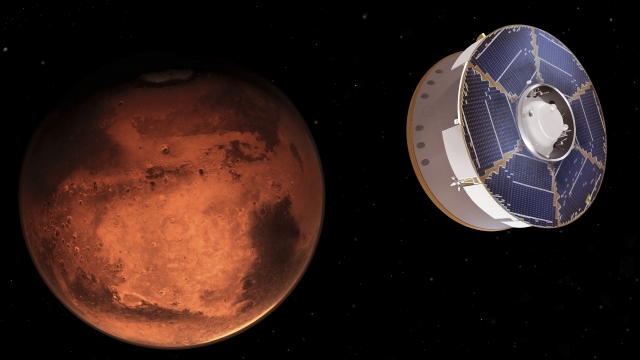 SMS
NASA's Rover To Land On Mars Thursday
By Newsy Staff
By Newsy Staff
February 16, 2021
NASA says the rover will rip through the planet's atmosphere at more than 12,000 miles per hour before touching down on the surface.
SHOW TRANSCRIPT

NASA's "Perseverance" rover is set to land on Mars Thursday.

NASA launched the rover in July.

By the time it reaches Mars' surface, it will have more than 290 million miles logged.

It's NASA's first mission to look for signs of ancient life on another planet to explore whether it was ever home to living creatures.

During the landing, NASA says the rover will rip through the planet's atmosphere at more than 12,000 miles per hour before touching down on the surface.

If you're looking to celebrate from Earth, Krispy Kreme is marking the occasion with a donut that's reportedly out of this world.

The chain will sell a donut that looks like the red planet. And if you're not a space fan but you are a sweets fan, you might want to pick one up.

It's a chocolate-filled donut dipped in caramel, topped with a Mars swirl and cookie space dust crumbs.

Once you have your donut, make sure to tune into Newsy to watch the landing. We'll have live special coverage starting at 3 p.m. Eastern Thursday. You can catch the Mars landing wherever you watch Newsy.