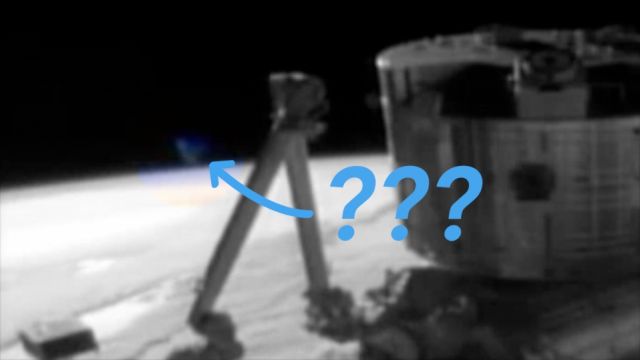 This is NASA's live-stream of the International Space Station. If you watch carefully, you can spot the moment the vast government conspiracy hiding the existence of aliens from us shatters into pieces.

This weird little shred of prismatic light doesn't vanish with the other reflections; instead, it seems to dance above the horizon for a few moments — until the NASA feed mysteriously cuts off. All we're left with is a blue screen and a lot of questions.

So what was that unusual shape? We're not saying it was aliens, because it probably wasn't aliens. But quite a few other people think this might be the real McCoy.

The attention has prompted NASA to tell the public it didn't manually shut off the live-stream. A NASA rep told ValueWalk "the station regularly passes out of range of the Tracking and Relay Data Satellites." Of course, that's just what NASA would say, isn't it.

We're inclined to believe NASA though; its live-streams are prone to both sudden blue screens and weird-looking lens flares. We have to assume the majority of these aren't aliens.

This is only the latest UFO to show up on the ISS live-stream, though past sightings have borne a strong resemblance to lens flares as well.