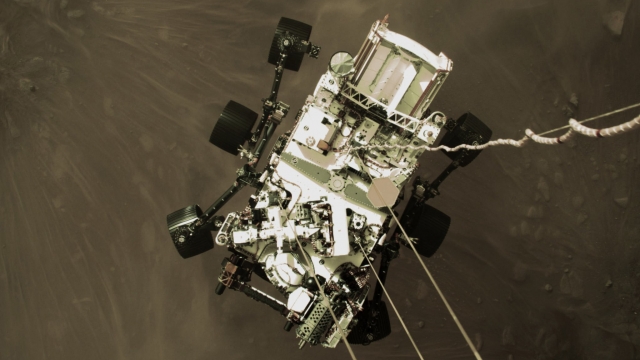 NASA is celebrating a major success in its Mars program.

The Perseverance rover is safely on the surface of the red planet and already sending back images.

After touchdown, NASA tweeted a photo of Perseverance with the caption, "Hello world. My first look at my forever home."

And if you missed it here on Newsy yesterday, check out the reaction at mission control right after NASA confirmed a safe landing.

"Touchdown confirmed, Perseverance safely on the surface of Mars. Ready to begin seeking the signs past life," a woman announced to a cheering crowd.

Newsy's Jay Strubberg spoke to Dr. Melissa Rice — just one of the people who helped make it all possible — about this mission's next steps and what she felt when perseverance finally touched down.

"There's so much tension building up to this moment," Rice said. "I have had 10 years of my own research invested into this. I have brought a dozen students on to this mission over the years, and I have got a group who are working with me now, with Western Washington University, and we have got so much invested in this. I can't believe we made it to the surface of Mars."

"Until we got that first image back from the ground, the haz camera — the hazard camera — showing the wheels in contact with Mars, that's when the water works started and I just started blubbering on my couch," she said.

"Perseverance is the first step in a multistage sample-return campaign," Rice said. "What that means is that perseverance is not only going to be studying rocks on Mars, it's going to be collecting rock samples, storing them in a hermetically sealed sample tubes and leaving those rock samples on the surface of Mars for the next mission to come and grab and bring back to Earth. So this is the first step towards getting rocks from the surface of Mars back to Earth so we can study them with the most sophisticated instruments available here in Earth laboratories. That has never been done before."

"When will that happen?" Strubberg asked. "There's going to be another mission to pick up what perseverance finds and then bring it back to Earth?"

"Exactly," Rice said, "and there will actually be two follow-up missions. The next one scheduled to launch in 2026, it will land next to perseverance, or where perseverance has deposited those samples, it will grab them and bring them back to a launch vehicle. But we can't launch all the way back to Earth in one shot. So it's going to launch those samples into orbit around Mars. And then it will require a third step to go back to Mars, into orbit around Mars, grab those samples from thin air — literally — and bring them all the way back to Earth. So Perseverance is step one in this three-step, decadelong process. It's going to be a long time until we get those rocks back here, but it will have been worth it."