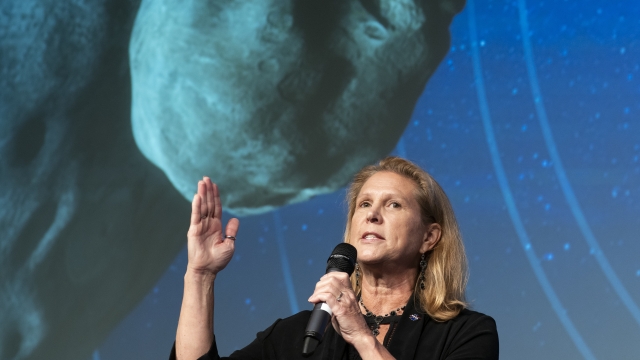 The purpose of the mission was to test the ability to protect Earth from potential planet-killing asteroids in the future.

When the NASA DART spacecraft made a kamikaze-like crash into an asteroid last month, NASA knew it had hit a bullseye.

Now the space agency says the data is in and DART's collision with the Dimorphos asteroid is a total success.

"For the first time ever, humanity has changed the orbit of a planetary body," said Lori Glaze, director of the ay Science Division (PSD) of NASA's Science Mission Directorate.

The mission sent a refrigerator-sized spacecraft up against an asteroid that was 525 feet across, crashing into it at 14,000 miles an hour. The idea was to test the ability to protect Earth from potential planet-killing asteroids in the future.

"If an Earth-threatening asteroid was discovered, and we could see it far enough away, this technique could be used to deflect it," NASA administrator Bill Nelson said.

The impact, seen by telescopes in space and on Earth, shortened the orbit of Dimorphos around a bigger asteroid, Didymos, by about 32 minutes.

These particular asteroids aren't a threat to Earth. But for others that are, a space collision like this one might be just enough to save the planet.

"It just gave it a small nudge, but if you wanted to do this in the future, it could potentially work but you'd want to do it years in advance," said Nancy Chabot, DART coordination lead at the Johns Hopkins Applied Physics Laboratory. "Warning time is really key here, in order to enable this sort of asteroid deflection."

The good news is NASA says it has identified nearly all of the very biggest near-Earth asteroids and l there's currently no known threat.  But there are smaller asteroids out there that could still cause major regional devastation and NASA predicts that only 40% those asteroids have been identified.