These Are The Victims Of The Stoneman Douglas High School Shooting 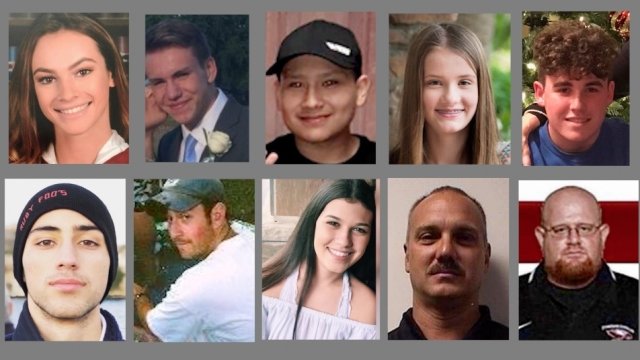 On Thursday, Police released the names of the people who died in Wednesday's shooting at Marjory Stoneman Douglas High School. This is a bit about who they were.

Duque was a freshman at Stoneman Douglas. His brother said on Instagram: "I love brother Martin you'll be missed buddy. I know you're in a better place."

Beigel was a geography teacher. He was also a counselor at a summer camp in Pennsylvania. One of his students said he saved her life.

Dworet was a senior at the school. He was also a swimmer. He had just been recruited to swim for the University of Indianapolis.

Feis was the school's assistant football coach. He was killed shielding students from gunfire. A student said he put everyone before himself.

Guttenberg's father posted on Facebook and said, "My heart is broken. ... We lost our daughter and my son Jesse Guttenberg lost his sister."

Hixon was Stoneman Douglas' athletic director. He was reportedly killed trying to save students. Those who knew him say he had "a great sense of humor" and loved his family.

Hoyer was a basketball fan. His cousin said he was a happy, funny kid who "could make you smile."

Loughran was a good student and loved the beach, according to her family. Her aunt said on Facebook, "While your thoughts are appreciated, I beg you to DO SOMETHING."

Montalto was a member of the winter guard on Stoneman Douglas' marching band. Her mother said she was "smart, loving, caring and strong" and "brightened any room she entered."

Friends say Oliver played basketball and loved to write poetry. He moved with his family from Venezuela when he was 3.

Petty's family said she was "vibrant and determined" and that she was "loved by all who knew her." She was in the JROTC.

Pollack planned to attend Lynn University this fall. Her father said she was "a very strong-willed young girl who had everything going for her."

A post on Facebook said Ramsay was "a smart, kind hearted, and thoughtful person," and "her soft warm demeanor brought the best out in all who knew her."

Schachter often played basketball with his friends and played the trombone in the Stoneman Douglas marching band. His father called him "a sweetheart of a kid."

Schentrup excelled at Stoneman Douglas. She was named a National Merit Scholarship semifinalist in September. Her friends sent several messages on social media to remember her.

Wang was in the Stoneman Douglas ROTC program. His cousin told the Miami Herald he held a door open so other students could escape. His friend called him "funny, nice and a great friend."