Myanmar Doesn't Recognize Its Muslims And Doesn't Want US To, Either 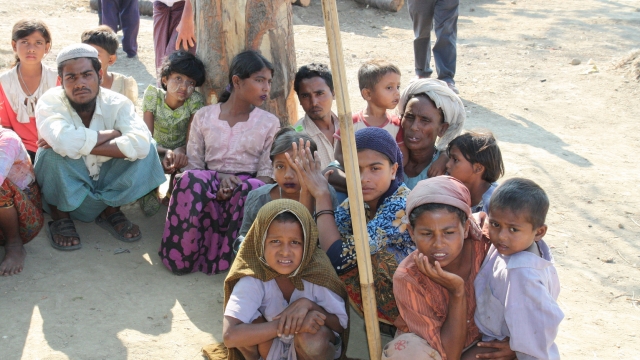 Despite the push for human rights in Myanmar, the majority party leader told a U.S. ambassador to not call the minority Muslim population "Rohingya."

Myanmar still doesn't recognize a minority Muslim population in its borders — and doesn't want the U.S. to, either.

Human rights groups say the the Rohingya people are one of the most persecuted ethnic groups in the world. About 800,000 people in Myanmar from the Muslim minority are currently stateless, and violence in the country's west has put thousands in internment camps.

That's because most of Myanmar doesn't recognize them as an ethnic group. The country has a majority Buddhist population, and the Rohingya are seen as a religious threat.

For many, this seems somewhat unexpected from Suu Kyi — who was awarded the Nobel Peace Prize in 1991 for "her non-violent struggle for democracy and human rights."

An author and longtime political prisoner, Suu Kyi's recently elected party, the National League for Democracy, pulled the country out of a military-led government last year.

That government didn't recognize the persecuted Muslims group, either.

But some have criticized Suu Kyi's long silence on the Rohingya persecution as a reason it continues.

The U.S. ambassador to Myanmar has already said the U.S. wouldn't follow along.

"Communities anywhere have the right or have the ability to decide what they're going to be called," said U.S. Ambassador Scot Marciel.

But it's not just a religious threat nationalist groups say the Rohingya pose. They speak the same dialect as nearby Bangladesh, a reason why some consider them illegal immigrants.

Recognizing them would mean revamping a 1982 citizenship law that listed the country's ethnic groups and excluded the Rohingya.

Of course, Myanmar's democratic party never said it would be overturning that law, and a party spokesman noted that request to foreign governments to stop using the word "is not possible to enforce."