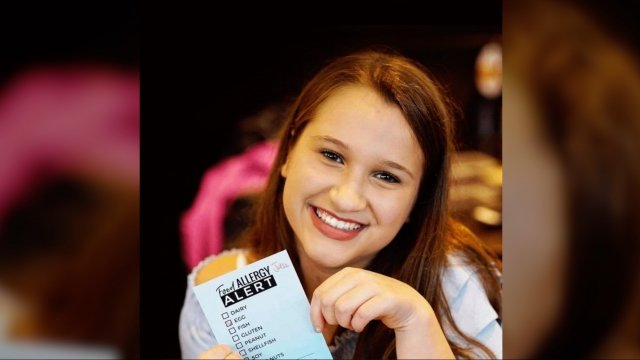 SMS
Teen's Invention Aims To Help Those With Food Allergies Safely Eat Out
By Lauren Stephenson
By Lauren Stephenson
September 14, 2017
Katie Parkins has life-threatening food allergies. She created My Teal Ticket to ensure others like her eat safely at restaurants.
SHOW TRANSCRIPT

About 15 million Americans have food allergies. And if you feel like you've heard more and more about food allergies in recent years, you probably have.

FAIR Health, a nonprofit that compiles insurance claim data, found the number of health insurance claims that included a diagnosis of anaphylactic food reactions went up 377 percent between 2007 and 2016.

Anaphylactic food reactions are when the body has a severe reaction to the antigen, which is the substance it's allergic to. Symptoms include difficulty breathing, getting a rash, turning pale and losing consciousness.

Baker is the CEO and chief medical officer of Food Allergy Research and Education. It's a nonprofit focused on improving education and awareness of food allergies. It also says it's the world's largest source of private funding for food allergy research.

"I've been an allergist for 35 years, and when I first started practicing, if we saw someone with a food allergy, we invited in all the trainees because it was an anomaly," Baker explained. "Now a third of the population that we see. And unfortunately — and that's the patient population, not the total population. But the reasons for that are probably multiple: Food has changed; the environment has changed; and childhood development has changed. Young people are very fortunate that they don't get sick anymore. They get vaccines and antibiotics, and the food is very different for them. So in fact, their immune systems don't evolve the way they used to. And we think all these factors are coming into increasing the incidence of food allergy."

One person who is hoping to make more people aware of the dangers of food allergies is Katie Parkins.

She's a typical 13-year-old busy with eighth grade and after-school activities like choir. But she also has to deal with some pretty adult stuff: severe allergies that if left untreated can be life-threatening. Parkins isn't alone. According to the Centers for Disease Control and Prevention, one in 13 American children have food allergies.

"Eating out — it's always been a challenge for me for so many reasons," Parkins said. "I don't really know if the waiter or waitress is writing down my allergens. Sometimes, they might mix them up."

A mix-up can be very dangerous for Parkins.

She explained: "My tongue will start to sting immediately. Then about three or four hives will appear across my face. ... I am anaphylactic with all of those foods and so what will happen is overtime, if I'm not given Benadryl or an EpiPen, if it comes to be that severe, my throat will close and my airways will be blocked for breathing."

Parkins was diagnosed with food allergies before she turned 3. She's allergic to tree nuts, and her allergies to fish and shellfish are so severe, the simple smell of them can cause a reaction.

The CDC says between 150 and 200 people die each year from reactions to food allergies. It cites a study that found that over a 13-year period, about half of food allergy-related deaths were caused by foods from restaurants or other food services. 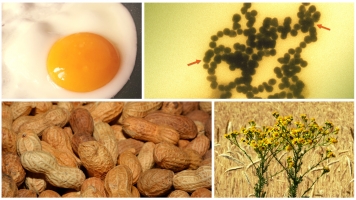 But only a few states have laws on the books aimed at improving restaurants' awareness of food allergies. And only some of those states require a restaurant manager to complete training on handling food allergies.

Parkins said: "I was brainstorming, ‘How can I fix this? How can I guarantee that I know that my allergens are properly listed on the order ticket already? And how they know about cross contact and how that can still be attached to my order.'"

That brainstorming session led Parkins to create My Teal Ticket. It's a form people with food allergies can fill out and hand to their servers at restaurants.

Parkins explained how it works: "They will check mark their allergens so it's already written down. And if their allergen is not written down, let's say they're allergic to sesame seeds. They would write down 'sesame seeds' under 'other,' then fill in the box and check mark 'other.' Let's say their allergies — they're more severe, so they need the waiter or waitress or the kitchen staff to take extra care to make sure that the allergens don't come into contact with the meal. They have to use fresh knives, fresh equipment, they would check 'cross contact.'"

That idea Parkins had in November became a business in July. She has a website and began getting orders the day it launched.

"Truthfully, I didn't expect the business to kick off as quickly as it did," she said.

Or to reach as far as it did.

"We've had people contact us from Canada, the U.K. — different places in Europe," Parkins said.

Baker explained: "This helps two ways: It helps the vendor focus on food allergy and appreciate the individual who has food allergy. And it sort of reinforces for the person with food allergy to the restaurant or other store that this is a problem for them. One of the problems with food allergy is a lack of awareness and understanding. People hear the word 'allergy' and they think more of an annoyance rather than something that could actually kill you. So in fact, we've had to do a lot of education related to this. I think the education and the fact that so many people are allergic to food now, have both come together to increase awareness. And that in and of itself has helped with the understanding of people that don't have food allergies or that prepare or serve."

"My hopes and plans for the future is to have people have a safer and easier dining experience while using My Teal Ticket. And to promote and share real stories of people in real life that do have food allergies so people can get a better understanding of what it is like," Parkins explained.

My Teal Ticket is also available in Spanish. Parkins says there could be more languages available in the future.