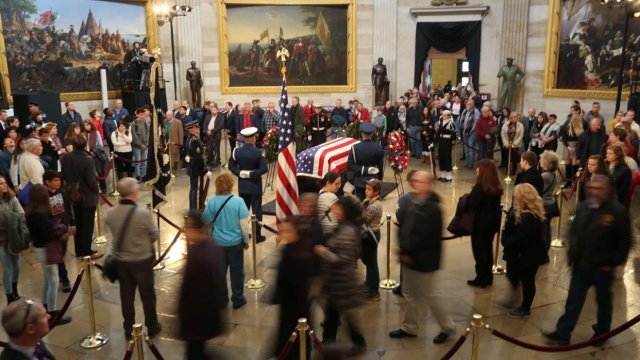 By Alexandra Miller
December 4, 2018
President George H.W. Bush will lie in state at the U.S. Capitol through Wednesday.
SHOW TRANSCRIPT

Two sisters from Tennessee made a split-second decision. They were only kids while President George H.W. Bush was in office, but they say they drove 13 hours to pay their respects to the former president as he lies in state at the U.S. Capitol. His, they say, is a life worth emulating.

"Even when he was on opposite sides of someone, he was respectful and a true gentleman," said Cari Beth McDonald.

At such a divisive time in our country, the sisters say they find it all the more important to honor Bush's qualities of decency.

"We can be so involved in social media that we feel that we don't need to be present and think it's important that we show respect to people in person this way," said sister Mari Kate.

It's not just former President Bush they wanted to honor, but the entire Bush family.

"They have shown the country warmth and service, and their love for each other speaks volumes to the rest of us," said Cari Beth.

For Rick Johnson, it's a little more personal. He worked for the Bush family post-presidency as they created the Bush School of Government and Public Service at Texas A&M.

President Bush "was the kind of person that you'd want to know, whether he was the president or not," he remembered.

Johnson says he was in awe of the way Bush carried himself no matter who was around: "Whether it was me or you or head of state, he would treat you just the same. He was a gentleman. He was a person before he was a leader."

When Johnson and his former colleagues reminisce about their former boss, he says one story sticks out.

He said President Bush asked: "'Do you want a cup of coffee?'

"The guy said sure. He went and poured the coffee. 'I' was never in his vocabulary, and that's saying something for someone that's the leader of the free world."