Most Florida Schools Won't Arm Teachers After State Says They Can 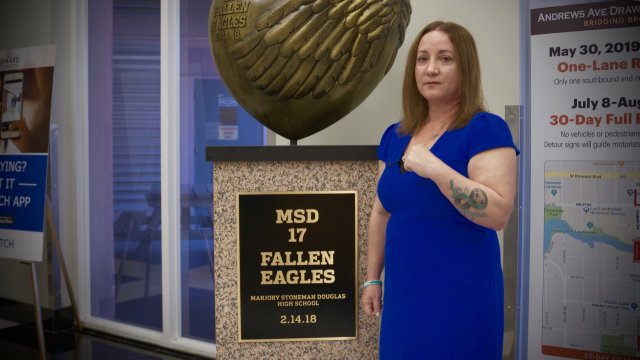 After each mass shooting, the question is the same. Could this have been prevented? Lori Alhadeff asked herself that same question after her own daughter was killed.

Her 14-year-old daughter Alyssa was shot in her classroom at Marjory Stoneman Douglas High School on Valentine's Day in 2018. She was one of 17 killed. Alhadeff didn’t take much time to grieve; she immediately became an advocate for safer schools, running for and winning a seat on the Broward County School Board.

Along with mental health and school hardening, including single point entries, Lori helped pass a law in New Jersey which gives teachers panic buttons in their classrooms to immediately alert law enforcement of an emergency. But there’s one thing she does not think will make schools safer: arming teachers.

"I sigh with a heavy heart because I don't believe in arming teachers. I think that we should arm our law enforcement. They are the experts to be able to go in and take down the threat," Alhadeff said.

Nearly three-quarters of U.S. teachers and most of the American public are opposed to arming teachers. But the Republican-led legislature in Florida disagrees. They'll now allow teachers and other staff to be armed. So far, 33 of Florida's 67 counties have pledged to participate in the Coach Aaron Feis Guardian Program, but most of them are choosing not to arm their teachers.

If they do, the law will require teachers go through 144 hours of training. Only eight of those are under active shooter situations.

Firearms instructor Adriano Cacares supports arming teachers. He thinks it could save lives during a shooting. And in training his fair share of beginners, he says it's more than just hours logged.

"You have to be trained in that situation and in a fight or flight situation, you do not know how you're going to react and you might freeze and with only eight hours of training, that's not enough to be able to do your job correctly," Cacares said.

Faculty members would have to undergo training through the sheriff — classes similar to the ones Cacares teaches — and score an 85% pass rate. And the state is prepared to dole out the money to get these teachers ready. The News Service of Florida says out of the 25 sheriff's offices utilizing the cash, they’re spending $3 million on salaries and benefits for employees they’ll train and $2 million on firearm supplies such as ammunition, weapons and gun holsters. But that's not sitting well with those in the classroom.

Teacher Paulette Shepard says she doesn't want to be responsible for a gun at school. "I just know for a fact that I do not possess the skills and, as old as I am, the maturity, to handle a gun when I'm in a situation where I might feel threatened, but I'm just talking to a student from a different side of the tracks," Shepard said.

But here in Florida, with the Parkland massacre still on top of mind, most agree there should be more armed officers in the schools.

"We definitely need a law enforcement officer with a gun on campus and depending on the size of the campus we may need more than one officer on campus," Alhadeff said. Caraces shared a similar sentiment, saying "no one's going to go to a place where there's five cops outside. They're gonna go for the easy target."

But no matter what changes, it's still too late to bring back Alyssa.

"It is our duty to make sure that when our kids go to school they go to school in a safe environment," Alhadeff said.