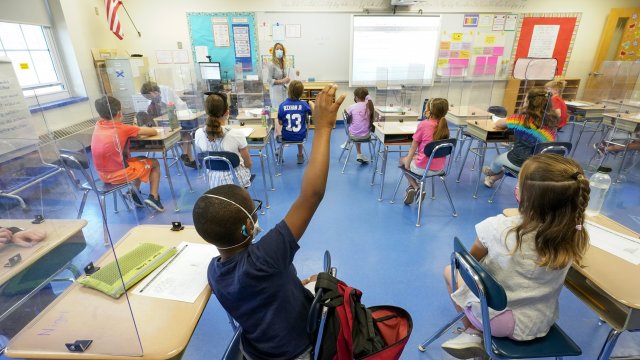 "We will not tolerate the schools to indoctrinate our children," a woman said during a school board meeting in Fort Worth, Texas.

Scenes like this during a Fort Worth Texas school board meeting are playing out across the country...all focused on the debate over critical race theory -- something that has become a powerful rallying cry among conservatives.

Critical race theory -- or CRT -- is a decades-old academic framework that explores the intersection of laws and race within society. For example, a CRT-focused course might study how housing laws have kept people of color out of certain neighborhoods, or how drug laws have disproportionately impacted Black people. It's usually taught in various disciplines in college or during graduate-level studies. Largely not in K-12 classrooms, according to experts.

"Please refrain from disrupting the board meeting," said a member of the Fort Worth ISD.

The Fort Worth Independent School District, like other school systems in the state, says it is not part of its curriculum.  But some families here allege the theory is being used in the classroom.

"I think what they need to focus on is teach[ing] reading and teach writing and teach math and teach government and history," said Sharron Hives. "The things that have been taught, you know, down through the years. I don't think that critical race theory and that ideology needs to be taught in school."

Opponents of CRT here in Texas who declined to go on camera called the theory divisive and the polar opposite of what American values represent. Some also say they gathered information about theory via conservative media outlets, and they believe school districts that say they aren't teaching critical race theory are simply doing it under a different name.

"A lot of them are getting their information off of biased news sources and they are being told that it's being taught in the schools," said high school world history teacher Diane Birdwell. "Number one, it's not being taught [in] school, especially in high school. Number two, the image of teachers trying to make kids feel bad about their race goes exactly against what we are as teachers."

Texas and several other states have moved to put laws into place targeting the way teachers can talk about racism in the classroom. One expert says a common theme has emerged amid the ongoing debate..

"It really is a more advanced understanding of our American experiment," said Vida Robertson, who is the Director of the Center for Critical Race Studies. Again, however, that doesn't keep the right from organizing a boogeyman so that folks who have both kindergartners and future college students might be able to unite around this monster."

The Texas law does not mention 'critical race theory' but it does put up limitations on how teachers discuss race, sex or current events in the classroom. And Texas Governor Greg Abbott is further targeting CRT during a July special legislative session.

Birdwell, who's also a member of the National Education Association, says she is hearing concern from teachers worried what impact the law could have on their ability to educate students.

"We are getting a lot of concerns from our members and we're addressing them and we've told them to you just teach, do your job, do it well and teach the facts and the facts…. well the children will figure out what's with the facts. And if parents have concerns, show them your materials."