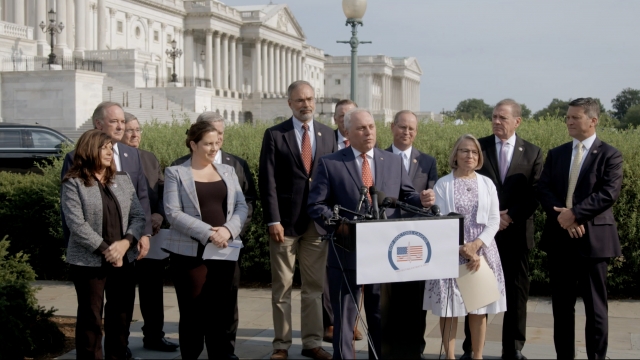 Vaccination rates among conservatives have lagged behind liberals. Nationwide, only about 57% of people over 12 are fully vaccinated.

As the Delta variant surges across the country, the calls for Americans to get vaccinated are growing louder —  and more Republicans are joining in.

"I would encourage people to get the vaccine. I have high confidence in it. I got it myself," said House Republican Whip Steve Scalise.

"This is not complicated. 97% of the people who are in the hospital now for COVID are unvaccinated. So if there's anybody out there willing to listen: Get vaccinated," said Senate Minority Leader Mitch McConnell.

Nationwide, vaccination rates among conservatives have lagged behind liberals, and that includes members of Congress. While 100% of Democrats on the Hill say they’ve been vaccinated, it's unclear how many Republicans can say the same. And there have been several breakout cases among vaccinated Capitol employees, including one lawmaker.

High-profile conservative media personalities have also made appeals to their viewers in recent days.

"And it absolutely makes sense for many Americans to get vaccinated. I believe in science. I believe in the science of vaccination," said Fox News host Sean Hannity.

But not all Republicans are putting the same emphasis behind their vaccine message. During a Thursday press conference, a group of Republican doctors spent more time focused on the origins of the virus, and they stopped short of issuing a full throated recommendation for everyone to get vaccinated.

"Vaccine is a medicine. And just like any other medicine there are side effects and this is a personal decision. This is not a mandate. This should not come down from the government saying you have to have something because there can be some side effects," said Rep. Greg Murphy. =

House Republican Whip Steve Scalise, who had COVID, just got his first vaccine dose on July 18.

"I had done the antibody test months ago, and it tested positive for the antibodies. And clearly that gives you protection, but with the Delta variant I felt I wanted that extra level of protection," said Scalise.

CDC data shows nearly 162 million Americans are fully vaccinated. But that's only about 57% of people over 12 years old — the population that's eligible to get the vaccine. Many of the states with the lowest vaccination rates are the ones currently experiencing the highest levels of community spread.