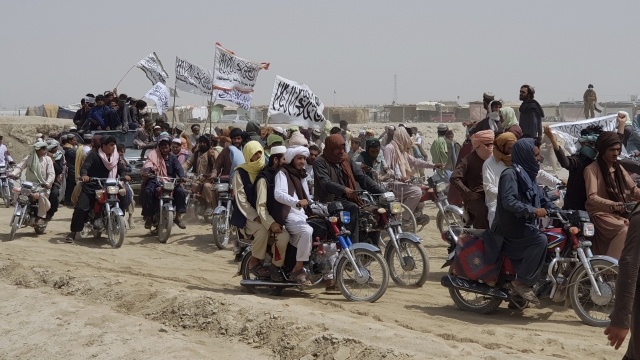 SMS
For Afghan Interpreters Outside Kabul, A Dangerous Journey Lies Ahead
By Sasha Ingber
By Sasha Ingber
July 26, 2021
Getting to Hamid Karzai International Airport in Kabul means risking their lives.
SHOW TRANSCRIPT

It’s a race against time. How fast can the Biden administration evacuate Afghans who helped U.S. forces...before the Taliban finds them and takes revenge?

Under Operation Allies Refuge, the first wave of 2,500 Afghans will soon arrive on U.S. soil—at Fort Lee, a military base in Virginia. But for thousands left behind, the road ahead is rough. Literally.

“We have not been asked to provide military transportation,” John Kirby, press secretary at the Pentagon told reporters.

Flights are leaving from Hamid Karzai International Airport in Kabul, its airfield currently protected by U.S. and Turkish troops. But for interpreters in hiding, outside Kabul, getting there means risking their lives.

"It could be much more difficult if they live in the south or in the east; a lot of the roads are cut by the Taliban and controlled by the Taliban. So they'll have to find a way to get themselves to Kabul to be able to escape. And I'm not going to pretend as if that's easy," says Carter Malkasian, former senior adviser at the Joint Chiefs of Staff and author of The American War in Afghanistan.

The paved road linking Kandahar to Kabul was funded by the U.S. government. Today it’s nicknamed the “highway of death,” after a spate of Taliban attacks. The Taliban have checkpoints along other major highways—presenting new dangers. A translator... reportedly beheaded at an outpost in the desert days ago.

And then there’s the negotiations between the U.S. and Turkey to keep the international airport secure:

The greatest threat there would really be if the Taliban were able to attack it repeatedly or seize the airport. But I think that that's something further out. And also we're going to have much bigger problems once that actually occurs.

Meanwhile, civilian casualties are up 47% compared to this time last year, according to a new U.N. report. The main reason... an emboldened Taliban and other anti-government groups.

“I've said this before, a negative outcome, a Taliban automatic military takeover, is not a foregone conclusion. We will continue to monitor the situation closely and make adjustments as necessary,” Gen. Mark Milley, chairman of the Joint Chiefs of Staff, said a press briefing.

Gen. Mark Milley says the Taliban’s strategy includes isolating populated areas. He says half of the country’s 34 provincial capitals are currently under threat. American airstrikes last week slowed advances... but officials haven’t said whether those will continue after the U.S. withdrawal is complete.