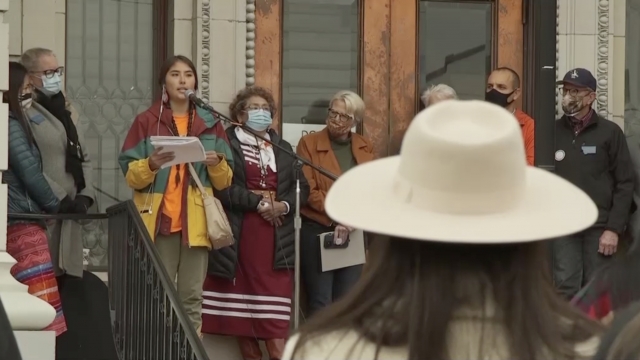 In Missoula, Montana, on the indigenous land of the Salish and Kalispel people, there's a call to action.

And now, there's been a boost from the top. President Joe Biden became the first president to issue a proclamation of Indigenous Peoples' Day.

He wrote: "For generations, Federal policies systematically sought to assimilate and displace Native people and eradicate Native cultures ... Today, we recognize Indigenous peoples' resilience and strength as well as the immeasurable positive impact that they have made on every aspect of American society."

President Biden issued a separate proclamation on Columbus Day, but also acknowledged the painful history of wrongs inflicted on tribal nations. Still, people at the rally said it's not enough.

"I think we're like two-thirds of the way there, and it's like, if you recognize that there was violence in those acts by celebrating them, I think we're saying it's still OK — that what he did was OK," Montana state Sen. Shane Morigeau said.

"Columbus is the original founder of genocide, rape, murder and ultimately the destruction of my people," Kelly said.

This isn't a new fight. Native American groups have been pushing for years to recognize this country's indigenous populations on Columbus Day.

Others observe Indigenous Peoples Day through proclamations, like Arizona, California and Minnesota.

In Montana, the cities of Missoula, Bozeman, Helena and Harlem join a list of more than 130 others across the country that celebrate Indigenous Peoples' Day. But the state as a whole does not.

"It's outrageous because indigenous people have done so much for Montana," Kelly said.

Earlier this year, two bills that would have established Indigenous Peoples' Day in Montana failed. One was to replace Columbus Day and the other was to add it on top of Columbus Day.

"I think we could start with the governor issuing some sort of executive order recognizing Indigenous Peoples' Day. I think that would mean a lot to me and all the Indigenous people and Native people in this state," Morigeau said.

The 2020 census shows that Native Americans make up more than 9% of Montana's population, with eight recognized tribal nations.

But this isn't just a Montana conversation. Protesters also rallied in Boston over the weekend, urging the governor of Massachusetts to make Indigenous Peoples Day a statewide holiday.

Newsy reached out to Montana Gov. Greg Gianforte to ask about this effort and the call for action.

The state marked American Indian Heritage Day in late September when Gianforte said this: "While today is a day of great celebration, our commitment to celebrating this heritage is not limited to one day."

Morigeau said, "At a bare minimum, I would like Montana to at least follow suit of what the president has just done."

So what's next? Sixteen-year-old Kelly had this to say: "Today I was asked to speak on the future, and the future is Indigenous."

And lawmakers in Montana vowed to take the fight to the next legislative session to try yet again.