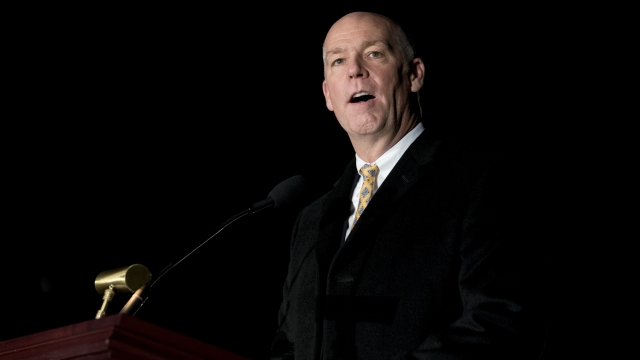 SMS
Montana Gov. Returning From Tuscany Vacation As Flood Disaster Grows
By Maritsa Georgiou
By Maritsa Georgiou
June 16, 2022
The governor’s office confirmed he was out of the country when it was noticed his lieutenant governor signed a statewide emergency declaration.

As his home state suffers catastrophic flood damage, Montana Gov. Greg Gianforte has been out of the country on what his spokesperson says is a long-planned personal trip with his wife.

Many have asked where the governor is, including multiple media outlets, without a response. His office responded to questions Thursday morning, saying they do not reveal the location of the governor when he's out of the country for security reasons, but will “share more information upon their return.”

Newsy obtained a photo of Gianforte and the first lady at a restaurant in Casole d’Elsa, which is a small village in the Tuscany region of Italy. The photo is time-stamped at 9:31 p.m. local time Wednesday.

A source that wishes to remain anonymous sent us a photo of the couple dining with multiple other people. The governor’s office confirmed Gianforte was out of the country when it was noticed his lieutenant governor signed a statewide emergency declaration as acting governor.

A spokesperson said he and the first lady left late last week on a long-planned personal trip, but details about the timeline and the destination were left out.

In an email Wednesday, sent about 12 minutes before the photo in Tuscany was taken, his office said he was returning home “early and as quickly as possible.” Another email sent at 10:21 Thursday morning said he will be back in Montana by Thursday night.