Fresh Moves Mobile Market Brings Food To Those In Need 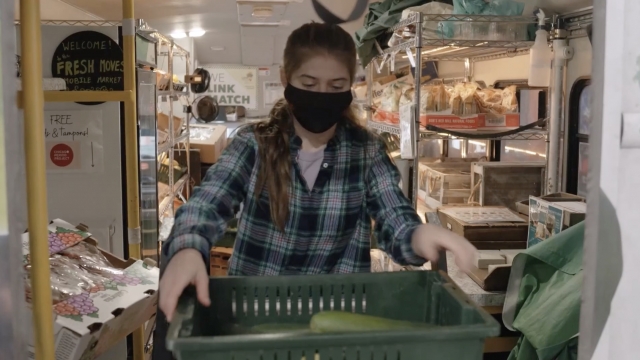 SMS
Fresh Moves Mobile Market Brings Food To Those In Need
By Lauren Magarino
By Lauren Magarino
November 19, 2021
The Urban Growers Collective — a Black- and women-led nonprofit in Chicago — runs the initiative by loading buses with fresh produce every week.

At the front of the line, Zelda McGraw is ready to buy some groceries off a bus called the Fresh Moves Mobile Market.

The Urban Growers Collective — a Black- and women-led nonprofit farm in Chicago — runs the initiative by loading buses with fresh produce every weekday and distributing it to 14 stops throughout Chicago. Its customer base has tripled over the last four years.

One stop is just steps away from affordable housing for seniors in south Chicago. It's a community of people typically at higher risk of facing food insecurity, according to the USDA.

For McGraw, the Fresh Moves Mobile Market is her main source of food.

"I don't know what we would do if we didn't have this program," she said. "This truck is well needed in every neighborhood."

South Chicago is considered a food desert. This means there's little to no access to nutritious, healthy foods — it could be fruits or vegetables that you would regularly pick up at your grocery store. This is a situation that's happening in many Chicago neighborhoods, particularly on the south and west sides. And it isn't an accident. Historically, there's been little investment to help support communities with essential access to food.

Grocery chain stores are hard to come by in these neighborhoods. McGraw said the closest grocery store was eight or nine blocks away.

In fact, the University of Chicago tracked supermarket locations in 2007, 2011, and 2014 and found supermarkets increased in the city, just not in low-income areas.

Nationally, there are swaths of low-income neighborhoods with low access to food in every region. It's an issue that can affect people's health.

"We know that when people are well-fed, they just do better," Laurell Sims with Urban Growers Collective said.  They do better mentally, they do better physically. And so it really helps, I think, give a boost to the seniors who are living in this facility."

The Fresh Moves Mobile Market is a life saver for those aiming to nourish their lives.

"It helped me to eat right," McGraw said. "It showed me the things that I need, that my body needs to stay healthy that I hadn't been given before, and I'm able to get them now through this truck."