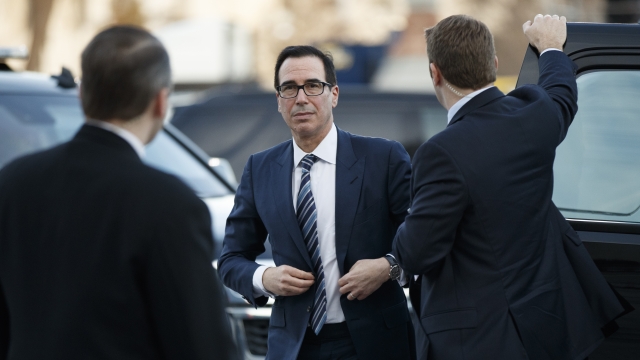 SMS
Mnuchin Reportedly Suggested Easing Tariffs On Chinese Goods
By Katherine Biek
By Katherine Biek
January 18, 2019
The next round of trade talks between the U.S. and China is scheduled for Jan. 30.
SHOW TRANSCRIPT

As the Trump administration prepares for its next round of trade talks with China, Treasury Secretary Steven Mnuchin reportedly proposed the U.S. offer to lift tariffs on Chinese goods.

But the reported idea appears to be just one strategy U.S. officials have thrown around ahead of discussions scheduled for Jan. 30. And the Journal said that as of Thursday, it hadn't been introduced to President Donald Trump.

China and the U.S. have implemented tariffs on hundreds of billions of dollars of each other's goods in the past year. But back in December, President Trump and Chinese President Xi Jinping agreed to a short-term trade truce.

As part of that 90-day truce, President Trump agreed not to move forward yet with a planned tariff increase on $200 billion of Chinese goods while the two countries negotiate. And China temporarily reduced tariffs on $126 billion worth of cars, trucks and auto parts made in the U.S.

In a statement sent to multiple outlets, a Treasury spokesperson downplayed the report about Mnuchin's suggestion, saying, "This is an ongoing process with the Chinese that is nowhere near completion."