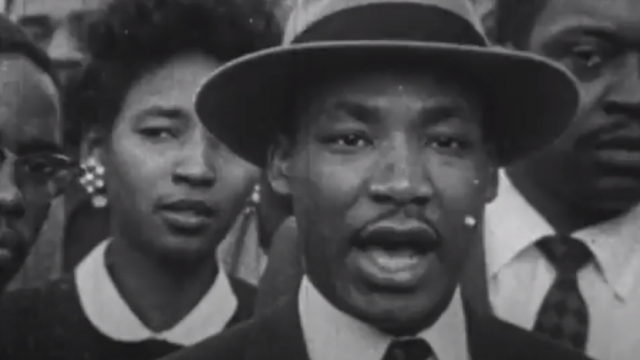 "The FBI says 'it's clear Martin Luther King Jr. is the most dangerous Negro in America and we have to use every resource at our disposal to destroy him."

"MLK/FBI" revisits the legacy of Dr. Martin Luther King Jr. from a new perspective. It's the first documentary to spotlight the civil rights leader's fraught relationship with the U.S. government and the FBI's targeted surveillance of his life.

Kareema B. Partin, associate director of the Cinematters: NY Social Justice Film Festival: "I think every great leader has their flaws, and Martin Luther King Jr.  certainly wasn't without his. And so during that time, though, [the FBI] made it a priority to highlight those aspects of him, despite the great work that he was doing."

Partin: "This is a snapshot of a great leader's life. And given the recent events, just another example of complete bias with how they investigated him and targeted they were."

The film is based on declassified FBI files — when the bureau wiretapped King's personal phone calls, bugged hotel rooms and made it a mission to delegitimize the activist and the civil rights movement. Interviews include historians, close friends of King, and even figures like former FBI director James Comey.

James Comey, former director of the FBI: "This represents the darkest part of the bureau's history."

Isaac Zablocki, director of The Carole Zabar Center for Film: "I think it's still relevant today — and unfortunately, in the last week, somehow became even more relevant."

Several reviews of the documentary have noted its relevance for today's conversations about racial injustice. Associated Press critic Mark Kennedy wrote: "There are lessons for 2021, for sure. … 'I Am A Man' placards at protests echo the 'Black Lives Matter' signs of today. White America's anxieties around Black empowerment have not changed much."

Partin: "It's very good to keep in mind just how relevant it is, unfortunately, and hopefully we can do better, especially when supporting leaders who are trying to affect change."