MLB's Adam LaRoche Opens Up About Retiring, Giving Up $13M For His Son 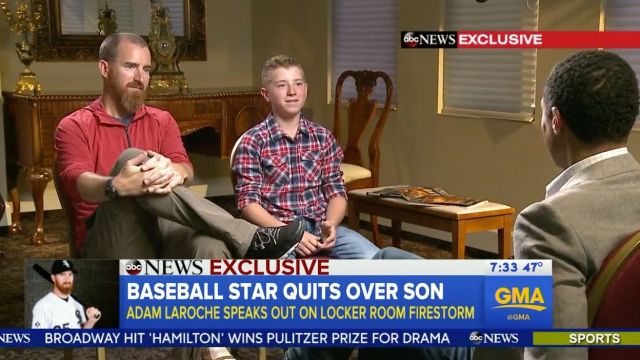 SMS
MLB's Adam LaRoche Opens Up About Retiring, Giving Up $13M For His Son
By Matt Moreno
By Matt Moreno
April 19, 2016
Chicago White Sox player Adam LaRoche retired shortly before the 2016 season after team officials said he couldn't bring his son to the ballpark.
SHOW TRANSCRIPT

Chicago White Sox player Adam LaRoche walked away from $13 million after the team asked him to scale back on bringing his 14-year-old son to the clubhouse.

And in his first on-camera interview since leaving major league baseball, LaRoche spoke with ABC about the decision.

"One of the things I probably thought the longest on was making sure that if I did this that he would never feel like this was on his shoulders," LaRoche told ABC.

LaRoche, a 12-year veteran, reportedly brought his son Drake to the clubhouse just about every day. Drake had a locker next to his dad's and even helped clean other player's shoes, among other jobs.

But Adam LaRoche said, after a while, a team executive asked him to stop bringing his son to the clubhouse. He said shortly after that, he thought about retiring.

LaRoche also said he embarked on a 10-day, undercover rescue mission to Southeast Asia in November to fight sex slavery. He says baseball wasn't as important after that and he wants to continue that kind of work.

But family seems to have always been important to LaRoche. At the ballpark, his son was a fixture of other teams besides the White Sox.

In 2014, when LaRoche was with the Washington Nationals, he said Drake was often called the "26th man" on the roster.

"Me and him come down here every year for spring training," Drake said.

"Really an awesome situation because there's not very many areas in the workplace where you can bring your son out to your everyday job," Adam said.

It appears the White Sox are getting along without LaRoche just fine. They've released statements hinting they've turned the page and are already in a race for first place in the AL Central.

This video includes clips from BuckCommander.com and The Exodus Road and images from Getty Images.