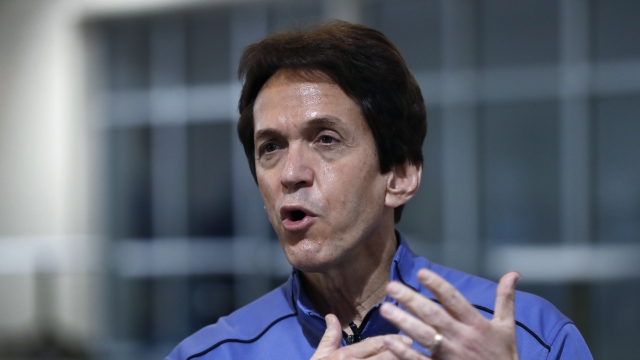 SMS
Author Mitch Albom Speaks With Newsy About New Book
By Newsy Staff
By Newsy Staff
November 15, 2021
His new best-selling work of fiction, "The Stranger in the Lifeboat," is a story about asking for help.

Mass kidnappings, powerful gangs and a presidential assassination. The chaos in Haiti us wrecking the lives of those who call it home nearly a month after a group of 17 American and Canadian missionaries were abducted. Their negotiations continue as their family's plea for their freedom. One American has a special bond with Haiti — bestselling author and longtime sportswriter Mitch Albom. He has an orphanage on the island. Newsy's Dave Briggs spoke with him about how he used its strife to write a new best-selling work of fiction.

NEWSY'S DAVE BRIGGS: The award-winning author Mitch Album joins us. Mitch, congratulations on "The Stranger in the Lifeboat" debuting at #1 on the New York Times Bestseller list. Before we get into the plot, why do you think this message has so resonated with audiences today?

MITCH ALBOM: Well, at its core, "The Stranger in the Lifeboat" is a story about asking for help. And I imagine, over the course of the last two years we've probably done more asking for help then we have in the last 20 years with everything that's going on in the pandemic, our economy and all that. And I think that's probably why people are embracing it. It's an upbeat book at the end — It's about healing and we probably all could use a little bit of that.

BRIGGS: For our viewers that don't know that story, tell us why you found yourself in a time of need.

ALBOM: Well for those who don't know, in addition to my writing and things, I operate an orphanage in Haiti that I have since the 2010 earthquake and I'm there every month and we have 53 children who were raised there  — just amazing kids. One of those children, a number of years ago, named Chika developed a brain tumor when she was five years old. We brought her to American and we basically adopted her as our daughter and we toured around the world trying to find a cure for her. She lived two years, which was about a year and a half longer than they gave her, but she died in the end and we were very upset, obviously. My wife, a person of faith, was able to go to her faith very quickly and comfort her. I took the opposite tactic and I said, "There can't be any good in the universe or any God in the universe who would take a seven year old. I mean how can you be benevolent and not be benevolent to a seven-year-old orphan from Haiti who survived the earthquake on the third day of her life, you know, and lost her mother two years later and somehow now you have to give her a brain tumor." But as time passed, and the years passed, I began to look at it differently because I say, otherwise you're gonna be angry all the time. And I can best sort of describe my attitude towards it on something that, actually, I wrote in the book when one of the characters confronts guy who says he's God — and by the way, I don't say he's God and you're gonna have to read the book to see if he is or isn't. I'm just saying, he says he is.

BRIGGS: People this past year and a half have lost loved ones, they've lost jobs. What did you learn through that experience and through Have Faith Haiti that everyone in this country that's gone through something the last couple of years — and frankly we all have — that they can learn to get through these tough circumstances and to actually be better for them.

ALBOM: Well, you mentioned Have Faith Haiti. One of the great advantages of operating an orphanage is that you never have to go very far to see people who have it worse than you do. And to see these 53 children, some of whom were left to die out in the woods by whoever gave birth to them, you know, literally were found under a tree, some of whom were left and malnutrition clinics in the hallways, nobody came back for them for two years they just lived in a hallway — to see these children whose total possessions can fit in a 12" by 12" cubby, and yet every night they sing prayers and songs and hymns of gratitude to God for what they have and they have nothing — this is the second poorest country in the world — it's very hard to look at that and say, "OK, well what my problems are worse than theirs." It's quite the opposite. You say, “My problems are easily solved compared to that. I was blessed with a mother and a father. I had a family home life. I had such advantages just even with that, that they're never going to have.”

BRIGGS: You were, in fact, in Haiti when a group of American and Canadian workers were kidnapped and they still remain hostages today — one of 800 kidnappings this year. How how can we help? What can be done? What needs to be done there in Haiti to make it a safer place for everyone?

ALBOM: Well, I mean, it's a big question, but the answer, in my view — my just humble, one person view as someone who's there every month for the last 12 years — the outside world needs to get involved. This is not something that Haiti can cure by itself. They’re a crippled government, a crippled economy. They still don't know who killed their president and it's months later. Can you imagine that in America? God forbid our president was assassinated and six months later, we're still going, "You know, we still don't know who did it." The government is in disarray, the police have no power and consequently the gangs run everything. And of those 800 people who have been kidnapped this year, while the headlines make it for the 17 American missionaries and Canadians who were there — and it was just tragic and they were visiting an orphanage and run an orphanage, I mean I know that story very well  — but of the 800 only about 50 are actually outsiders. The other 750 or just average Haitians who are kidnapped literally right off the street. Can you imagine just going to work and getting out of your car and boom, someone comes up, puts a gun to your head, takes you off someplace, starts going through your phone and starts calling people on your phone and say, "I have Dave and if you want to see him again give me $1,000,000." And people go, "$1,000,000? I don’t have $1,000,000." And then they call back and say, "Give me $500,000. Give me $100,000. Give me $50,000 and give me $100." You know, they're telling people to sell the refrigerators that they have and give them the money that they get for the refrigerators. They're kidnapping poor people and holding them hostage and so that nobody goes outside and nobody goes into certain areas of Port au Prince because you're just literally afraid for your life. Our kids at our orphanage have not been outside of our orphanage in nearly two years between COVID and kidnappings. We have not left and we only had a third of an acre, so it's not like there's a lot of room. They have not gone outside. Can you imagine if your child couldn't go outside for two years? It's no way to live. And so we need a presence from the UN or from America or something to come in there and help because Haiti you can't do it by itself.

BRIGGS: Do you fear for your life when you're there, Mitch?

ALBOM: Yeah, I mean to be honest, especially the trip from the airport to the orphanage because there have been kidnappings along the way in those different places. We take a lot of precautions, great precautions and I've been blessed to make some friends down there and they have security and bodyguards and people like that we can use but I mean you're never 100% safe. But, I belong there. You know, I took on the responsibility of raising these children. We don't adopt our kids out. We raise them there and they go to school there and they live there and they're nurtured and taken care of there until college, which we take care of too. So, I made the commitment and I have to be there. But yeah, you're asking a question and I'm not going to lie to you. Sure, I'm afraid for me and for my wife and for all of us.

BRIGGS: We're thankful that you have an interest and a passion for books. The book is "The Stranger in the Lifeboat" debuting at #1 on the New York Times Best Seller list available in bookstores and on Amazon today. Great pleasure to talk with you, Mitch.

BRIGGS: Thank you. I have enjoyed it.