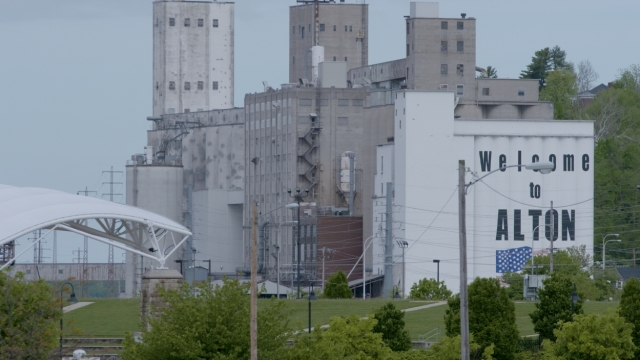 The bursting Mississippi River is encroaching on homes and storefronts in Alton, IL — a city about 20 miles north of St. Louis.

Alton Public Works Director Bob Barnhart says his crews have been putting up temporary barriers in some of the worst hit areas since Thursday.

"We expect it to crest close to one of the top five flood levels in Alton," said Barnhart.

The river city has dealt with more than 10 flood events since 1844, according to a flood memorial there. This time, several storefronts have closed their doors and officials have closed several roads as the water continues to rise.

"I'm standing on Illinois 100 and officials have closed most of this road due to flooding, but to the left of me is the Ardent Mills grain elevators and what's really interesting is they're used to this flooding. So they're still currently operating. There are employees right behind me, behind that retaining wall still doing their job today."

City employees built a barrier along one of the roads that mill employees use to haul grains. Barnhart says Ardent Mills worked with the city to install flood protection measures. The mill opened in Alton in 1942. It holds up to 2.25 million pounds of flour and employs around 90 people.

"I believe they serve a lot of nation wide need as far as their products concerned and their very central to a lot of businesses throughout the country," said Barnhart.

Alton is used to some flooding, since it's located near where the Mississippi and Missouri rivers merge. In 1993, the city saw its worst flood to date where the water crest 23 feet above flood stage.