In The US, Minorities Are Exposed To More Air Pollution 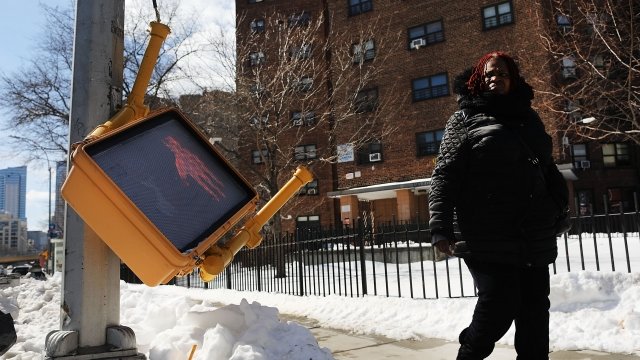 Race, not income, age or education, is the main thing influencing how much pollution someone is exposed to. And minorities are exposed to the most.

People of color are exposed to more air pollution than their white non-Hispanic counterparts.

Researchers at the University of Washington looked at exposure to nitrogen dioxide, one of the main pollutants produced by cars. It found that race was the most significant influence on rates of exposure — more than income, age or education.

These findings are in line with what we know about segregation in U.S. cities. For instance, race tends to determine where someone lives within a city and minorities are more likely to live near high-traffic roadways.

Exposure to this type of pollution can lead to respiratory diseases like asthma or cause asthma attacks in people who already have the disease.

Other studies have found that living close to major roadways increases your risk of dying from lung cancer. And the new study found 5,000 premature deaths from heart disease could have been prevented in minority groups if they had breathed the lower pollution levels whites tend to experience.

Estimates in a new study say air pollution could be a factor in up to 3.4 million preterm births.

The problem extends to schools, too. A report earlier this year found 4.4 million school children were exposed to highly polluted air. The problem was more pronounced in schools with more low-income and minority students.

Children exposed to air pollution tend to develop asthma, which in turn may lead to childhood obesity. But their cognitive development can also be impacted by long-term exposure to the pollution.

The researchers did notice that from 2000 to 2010 the pollution exposure gap between people of color and whites did decrease. But they think that's a sign air quality improved overall, not that cities were becoming more integrated.