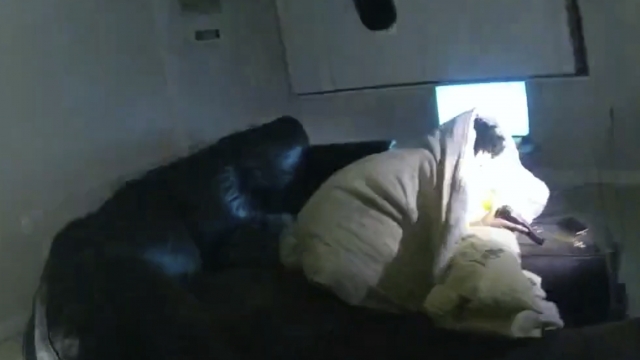 Minnesota Attorney General Keith Ellison will join the review of the fatal shooting of a Black man by Minneapolis police, authorities said Friday, shortly after police released body camera footage that showed SWAT team officers entering an apartment and shooting the 22-year-old man, who was wrapped in a blanket and had a gun in his hand.

Amir Locke was killed in the shooting just before 7 a.m. on Wednesday. Police said Locke pointed a loaded gun “in the direction of officers.” An incident report said he had two wounds in the chest and one in the right wrist.

Civil rights attorney Ben Crump said during a Friday morning news conference that Locke's family was “just flabbergasted at the fact that Amir was killed in this way” and disgusted at how the SWAT team raid was conducted.

“They didn’t even give him a chance,” Crump said. He said it was shocking that Minneapolis police had not learned from the killing of Breonna Taylor in Louisville, Kentucky.

The body camera video released late Thursday showed the footage in slow motion and at regular speed. It shows an officer using a key to unlock the door and enter, followed by at least four officers in uniform and protective vests, time-stamped at about 6:48 a.m. As they enter, they repeatedly shout, “Police, search warrant!” They also shout “Hands!” and “Get on the ground!” The video shows an officer kick a sectional sofa, and Locke, who was wrapped in a blanket on the sofa, begins to move, holding a pistol. Three shots are heard, and the video ends.

The city also released a still from the video showing Locke holding the gun, his trigger finger along the side of the barrel. The top of Locke’s head is barely visible.

A gun-rights group highlighted the timing of the raid, saying it appeared from the video that Locke had been awakened by a confusing array of commands from multiple officers pointing lights and guns at him.

“Mr. Locke did what many of us might do in the same confusing circumstances, he reached for a legal means of self-defense while he sought to understand what was happening,” said Rob Doar, a spokesman for the Minnesota Gun Owners Caucus.

Interim Chief Amelia Huffman said during a news conference after the video was released that Locke isn't named in the warrants. She said it isn't clear how or whether Locke is connected to the homicide investigation, which she said is under the control of St. Paul police. A spokesman for the St. Paul Police Department said he could not comment because the homicide investigation is ongoing.