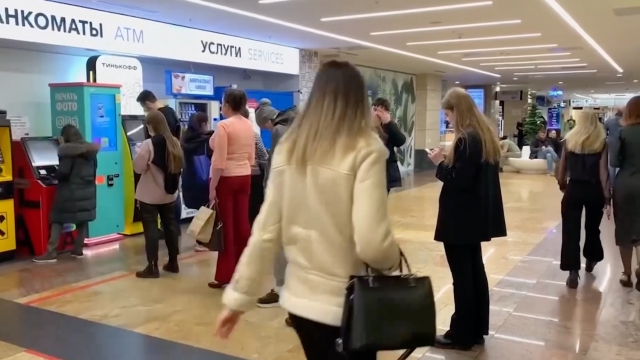 SMS
Millennials, Generation Z Trying To Leave Russia
By Axel Turcios
By Axel Turcios
March 2, 2022
A couple who was building a life in St. Petersburg had to flee Russia after sanctions and a possible military draft.

One American says leaving Russia was the hardest decision she and her husband ever made. At her request, Newsy is not sharing the woman's identity. The couple fears the Kremlin could retaliate.

"We had entire lives there, entire friends, our family, our cat, our turtle, we had to leave behind," she said. "My biggest fear was that my husband would be called for some sort of compulsory military service, which would mean he could not leave the country."

As Russian aggression towards Ukraine escalated, the chances for her Russian husband to be called into military draft were intensifying. Two of their friends were called.

"No one has gone yet," she said. "And I don't know what the consequences for that will be — for not showing up."

The couple has been married for almost two years. They were building a life in St. Petersburg.

"We haven't finished building our house yet," the woman continued. "Construction is ongoing. You know, we have two cars."

Economic sanctions are striking hundreds of Russians. She says they especially affect young working people, like them.

"My friends that had euro accounts, dollar accounts in Russian banks have been pretty much unable to withdraw them," she continued.

The woman says a growing number of millennials and Gen-Z are furious and resentful of Putin.

"It literally ruins their lives. It removes any sense of economic stability any sense of freedom," she said. "These people are looking for any way they can to leave."

She claims most of the elderly believe Ukraine is the aggressor.

"Imagine an old woman sitting in a room who never leaves her room and there is a man, Putin, who most Russian women think is very handsome, a handsome man telling you, 'There are these bad Ukrainians killing our young men and we're going to go stop that.' Of course they would support it, you know?"

Originally, the couple was going to cross the border to Finland and wait there in hopes things would get better, but the situation inflamed.

Instead, they took a 40-minute flight to Finland, and the next day, a direct flight to New York City.

Although her husband — who was born and raised in Russia — had the right visas, he was heavily questioned on arrival to the U.S.

NEWSY'S AXEL TURCIOS: What does the future hold for you and your husband?

UNIDENTIFIED WOMAN: It's only been three days, so we're incredibly fortunate that we have family here that can take us in ... He doesn't speak English. Like, I don't know what is he going to do here. It's not very clear.