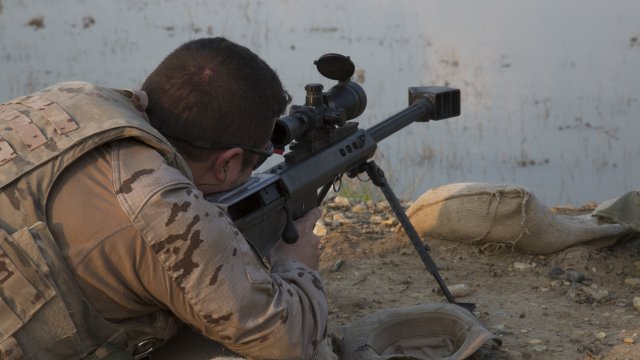 SMS
Pentagon To Tackle Extremism With Soon-To-Be Veterans
By Terace Garnier
By Terace Garnier
February 15, 2021
Efforts to hunt down extremists in the ranks are ramping up as the Pentagon focuses on training members transitioning into the civilian sector.
SHOW TRANSCRIPT

The signs of last month's insurrection are still obvious — unscalable fences like the one behind me protecting key areas of the Capitol. But there is some less obvious fallout, especially inside the military, where the effort to hunt down extremists in the ranks is ramping up.

"There's a concerted effort to prepare people as they get ready to retire. And I witnessed that, I went through it myself. Maybe there's more we can do. Maybe we need to help veterans, future veterans understand the pull that can come from some of these groups," Pentagon press secretary John Kirby said. "And maybe those groups are targeting potential veterans that feel disaffected."

Earlier this month, the U.S. military acknowledged white nationalists in the ranks — taking the extraordinary step of planning a military-wide stand-down, basically a pause in regular activity, to figure out what to do.

The decision from Llyod Austin — our first Black defense secretary ever.

He said this during his confirmation hearing in January:

" ... and to rid our ranks of racists and extremists and to create a climate where everyone fit and willing has the opportunity to serve this country with dignity. The job of the Department of Defense is to keep America safe from our enemies. But we can't do that if some of our enemies lie within our own ranks."

Through interviews with experts, Newsy learned one of the largest risks are veterans who felt unappreciated in the military or felt they were treated unfairly.

"The appeal of authoritarianism in an age of uncertainty. And this threat to democracy comes from people feeling that they're being treated unfairly," Professor Fathali Moghaddam said.

This George Washington professor of psychology says the military's focus on educating troops is good, but only one first step.

"We have to focus on the two aspects. One is socializing, training individuals to understand what is radicalization. How does extremist violence happen? How do people get sucked into these movements? At the second level, after the individual male or female leaves a military, they have to follow up, use the connections that the military has and to keep those connections strong, and to follow up and make sure that strange things are not happening," Moghaddam said.

He says the biggest draw to extremist groups is "wanting to belong," or feeling a part of something bigger, which he says makes military members the perfect target for extremist recruiters.

"Because these are people who are well-trained, they're disciplined, and they can use violence. And you think, 'Wow, this is our opportunity. Let's get these people and use violence through them,'" Moghaddam added.

There are no firm estimates about how many extremists are in the military. But we do know about 14 percent of the people arrested after the insurrection are either current or former members of the military.