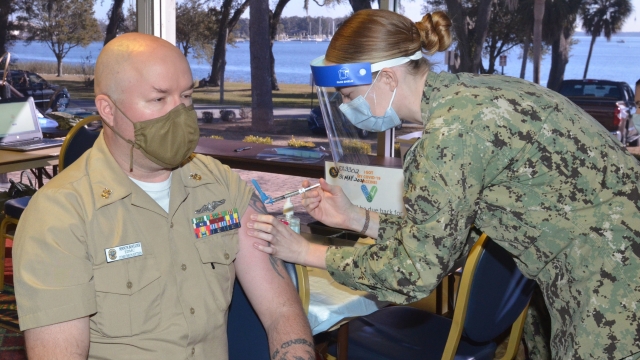 The U.S. military is not planning to make vaccinations mandatory for service members even though a large portion of troops around the world are resisting the shots so far.

“If you believe, as I did, it's the right thing for you, please consider accepting it when it's offered to you," Lloyd Austin said.

According to a New York Times poll, one-third of active-duty and guard members aren’t interested in getting the vaccine.

“We have had some that have had trepidation, and part of it is actually a misunderstanding,” Minnesota State Public Affairs Officer Lt. Col. Scott Hawks said.

Lt. Col. Scott Hawks tells Newsy many of the concerns are based on the spreading of false information or a feeling of invincibility.

“Some of our younger population isn’t as negatively impacted by the virus itself, and sometimes they feel they are not in that group that needs it," Hawk said.

There is notable hesitation among minority troops.

“[Secretary Lloyd Austin] is mindful that there are cultural and community concerns, in many, with many people of color about the vaccine. Some of it's based on, on some painful history,” Pentagon press secretary John Kirby said.

An example of that painful history: the 1932 Tuskegee Experiment,  where 600 Black men in Alabama were exposed to the contagious venereal disease syphilis without their knowledge.

Researchers purposely withheld information and treatments, which caused many to die, go blind or lose their minds.

When Newsy asked Capt. Tyler Anderson, who is of Colombian descent, if he had any concerns regarding the vaccine, he said yes: a fear of “the unknown” that quickly dissolved once he received his second dose.

“It's a great sense of relief, especially with just people that I work with that once we're vaccinated, we feel like we're getting close to that semblance of normal. And you just feel that there's this, this shroud that's kind of getting back to normal as people are able to get back to being around each other again and working with each other," Anderson said.

The Pentagon says so far, virtually all of the 1.3 million doses they’ve received have been administered to troops serving around the world.