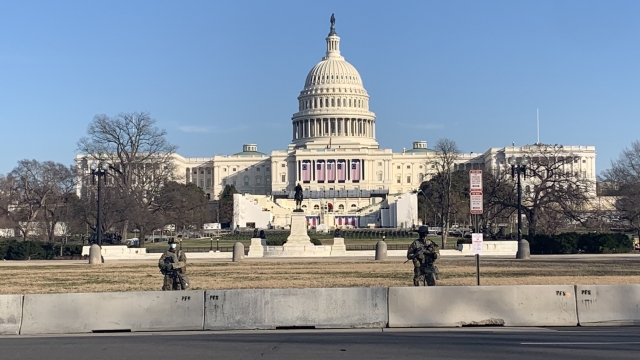 SMS
Active-Duty Military, Veterans Under Investigation After Capitol Riot
By Terace Garnier
By Terace Garnier
January 12, 2021
The Army and veterans organizations are looking into whether their members participated in the riot.
SHOW TRANSCRIPT

One hundred seventy people already linked to last week's insurrection at the Capitol, 70 now charged in connection to the riot. And federal officials say this is only the beginning.

“We are going to focus on the most significant charges as a deterrent because regardless of if it was just a trespass on the Capitol or someone planted a pipe bomb, you will be charged and you will be found,” Steven D'Antuono said.

Members of Congress like Sen. Tammy Duckworth are concerned current and former military members were a part of the chaos.

She’s calling for a full investigation.

Sen. Kirsten Gillibrand has also demanded answers from the DOD. She tells Newsy her concerns focus more on those military members or veterans who have ties to White supremacists or other extremist groups.

"I had the benefit of talking to one of our generals, and I was able to ask her what types of investigations they're going to do to assess White nationalists and extremists within the ranks of the armed services, particularly in the National Guard. She said they will be looking very intensely at it,” Gillibrand said.

The Army is conducting its own investigation after photos surfaced showing Capt. Emily Rainey was seen protesting as an active-duty member, a violation of the Uniform Code of Military Justice.  There have been calls for court martialing military involved in the violence. The Army told active and retired members in a letter that the military has no role in determining elections and they should follow the law "whether we are in uniform or out."

National veteran organizations are doing their own investigations. The Disabled American Veterans group vows to take action against any of its members who broke the law on Jan. 6.

The American Legion also denounced the insurrection chaos that ensued, and the organization says it’s doing its part to hold veterans accountable for their actions.

“The important thing is to make your voice heard, but do it in a peaceful way, respectful way. Veterans have witnessed war and violence and destruction in all parts of the world. We definitely don't want to see that here at home,” John Raughter said.

While there were many peacefully protesting on Jan. 6, at the end of the day, many lost lives, including Capitol Police officer and veteran Brian Sicknick. He gave his life defending the Capitol.