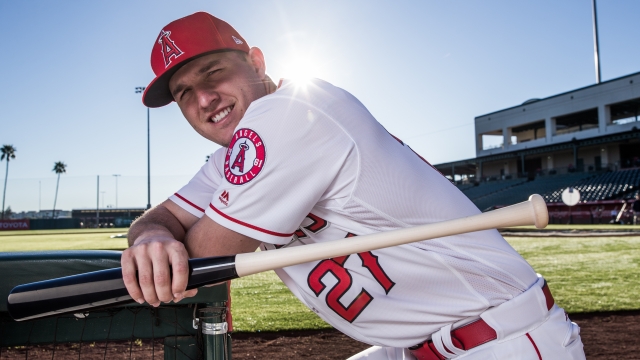 SMS
Mike Trout Is About To Sign The Richest Contract In Baseball History
By Joshua Kranzberg
By Joshua Kranzberg
March 19, 2019
The Angels outfielder is arguably the best player in baseball, and well on his way to being an all-time great.
SHOW TRANSCRIPT

With one stroke of the pen, baseball player Mike Trout will make history.

Trout has reportedly agreed to a 12-year, $430 million contract extension with his current team, the Los Angeles Angels of Anaheim. It's the richest contract in baseball history.

To put that in perspective, that's a full $100 million more than what Bryce Harper signed for earlier this month with the Philadelphia Phillies.

So the question that you're probably asking now is, "Is he worth all that money?" The short answer is yes. He's worth every penny.

In his seven full seasons in the major leagues, he's been in the top 5 for MVP voting every year, winning it twice. He's been named to the All-Star Game every season. He's good at pretty much everything, commonly referred to as a five-tool player. Hitting for average, hitting for power, running, fielding and throwing.

To get a little advanced for a second, let's look at Wins Above Replacement. Basically, it looks at how much better a player is compared to an average major league ballplayer. In his career so far, Trout has amassed 64 wins above replacement. That puts him 144th all time. ALL TIME. And he's only 26.

His career stats so far line up with some players you might have heard of: Frank Robinson, Ken Griffey, Jr., Mickey Mantle, Hank Aaron.

When you lay it all out, and depending on what metrics you use, there's even the possibility that Mike Trout will be underpaid by this deal, considering how much value he brings to the Angels and Major League Baseball as a whole.