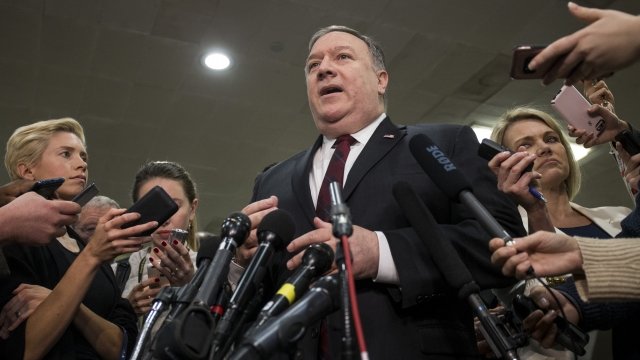 According to the State Department, Pompeo will be stopping in Jordan, Egypt, Saudi Arabia and five other other countries to meet with regional leaders. The president's national security adviser John Bolton is also making the trip.

Multiple outlets report the countries' leaders are sure to question Pompeo about President Donald Trump's decision to pull American troops out of Syria.

What remains unclear is the timeline for such a withdrawal. The president originally ordered the Pentagon to remove all American forces within 30 days, but he later pushed it back to four months. But then on Sunday, Bolton told reporters that the U.S. would remain in Syria until remnants of ISIS are defeated and until Turkey guarantees the safety of Kurdish forces in the country.

Pompeo reportedly plans to assure Middle Eastern leaders that despite the troop withdrawal announcement, the Trump administration will continue its efforts to defeat ISIS in the region and keep pressure on Iran.

While in Saudi Arabia, Pompeo is also expected to request an update on the country's investigation into the death of journalist Jamal Khashoggi.