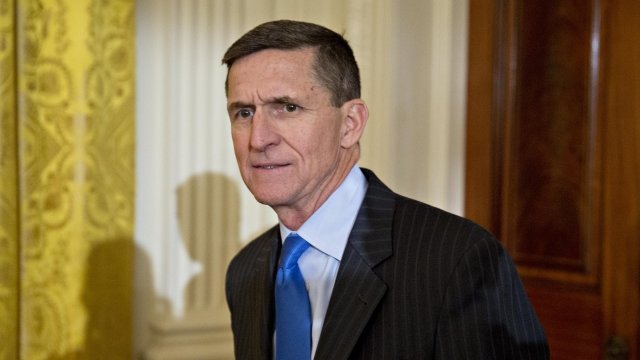 SMS
Mike Flynn Pleads Guilty In Special Counsel's Investigation
By Lindsey Pulse
By Lindsey Pulse
December 1, 2017
The former national security adviser was charged with knowingly making false statements to the FBI about his communications with a Russian ambassador.
SHOW TRANSCRIPT

Flynn was charged with knowingly making false statements to the FBI about his communications with Sergey Kislyak, who was the Russian ambassador to the U.S. at that time.

Flynn has been a central figure in Mueller's investigation into Russian meddling in the 2016 U.S. presidential election.

Flynn resigned as national security adviser in February after misleading Vice President Mike Pence about discussions he had with that Russian ambassador.

Flynn's plea marks the biggest admission of guilt thus far in Mueller's investigation. He could face up to five years in prison.

Flynn released a statement that said "it has been extraordinarily painful to endure these many months of false accusations of 'treason'" and that he accepts full responsibility for the actions he acknowledged in court.