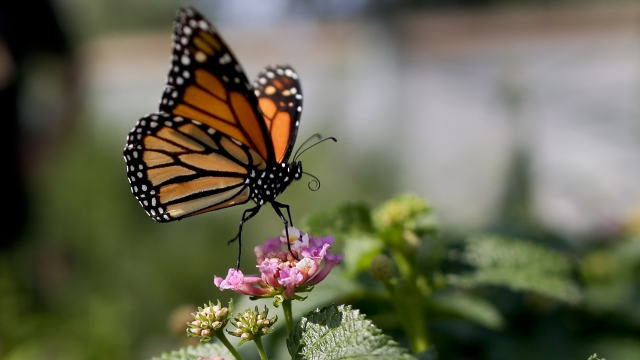 The threat facing one of the country's most recognizable butterflies.

A rallying cry to save a particular set of pollinators.

"The numbers are way, way down from what they were 20-30 years ago. I think it's safe to say they're not doing well," said Glenn Marangelo, Missoula Butterfly House and Insectarium development director.

For some, that could be an understatement. The International Union for the Conservation of Nature (IUCN) says the native population of migrant monarchs has dropped 22% to 72% over the past decade. The culprits?

Like legal and illegal deforestation, excessive use of pesticides and herbicides, and climate change.

The IUCN says the Western population is at a greater risk of extinction. Those numbers have dropped by about 99.9% between the 1980s and 2021. As for the Eastern population? It's close behind with at least an 84% drop recorded from 1996 to 2014.

So, now the call for conservation extends into our communities.

"You can see the vibrant colors here. This is where the nectar is inside the plant, so this is what attracts the pollinators," says Bay Area Landscape Nursery's Trent Hoffman.

People all over the U.S. are urged to do their part in protecting something so important to our ecosystem.

The change can be small, like Donna Cinacrope, who inspired her retirement community to grow a habitat.

"They had them for about 2 weeks in their room and then they started to root and then we had a milkweed planting party," said Cinacrope.

"Hopefully what we're doing is helping in our small part of the world to actually solve the problem," says Koen.

Milkweed is the only plant monarch butterflies eat.

"You usually don't want things to eat your plants but in this case it's a good thing," said Hoffman.

But some experts, like Marangelo, say planting any sort of wildflower will help.

"I think the more people that work together, and understand the need and education behind what we need to do for insects, the better," said Marangelo.